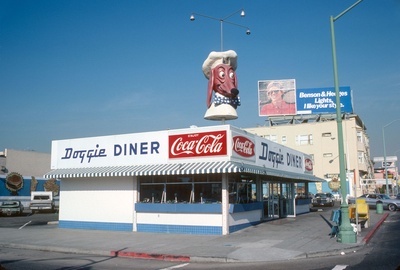 In the good ol’ days, some eateries, and dare we write it, “dives, diners, and drive ins,” were more interesting, if only for their store fronts. The Doggie Diner certainly counted as an eye-catcher with its seven foot tall rotating fiberglass head of a saucer eyed Dachshund sporting a rather guilty looking grin.

The Doggie Diner fast food chain began with one restaurant that was opened in Oakland, California by Al Ross in 1948. We’re not sure whose idea it was to erect a rotating giant dog head, though the original Doggie Diner sign was a hot dog with four short legs, tail and head. Later, the choice of breed was determined by Harold Bachman, a billboard and ad layout designer who sketched the design for the giant rotating Dachshund head in 1965. He chose the Dachshund because the menu featured “wiener dogs.”

Comedian, Phyllis Diller, was a regular. She’d be driven up to the Doggie Diner in her limousine and would send her chauffeur in to buy a Chili Cheese Burger. American soldiers knew about Doggie Diners, too. The company sent Doggie Diner wrappers to troops fighting in the Korean War. The GIs were served their rations in the wrappers to remind them of what they were fighting for back at home.

In time, the “wiener dog” heads marked the locations of thirty Doggie Diners around the San Francisco Bay Area. The heads had become so iconic that in 2006, the Doggie Diner dog head became a designated San Francisco landmark No. 254.

Sadly, Doggie Diners couldn’t compete with the likes of McDonald’s and Burger King, in part because Doggie Diner was a unionized restaurant, and competition from non-union chains like the aforementioned drive ins prevented further expansion. Doggie Diners went out of business in 1986. All the large dog head signs were taken down, and many of them were resold to private parties including three to Burning Man founder, John Law. The city of San Francisco got one of the heads which it restored, refurbished, and installed it on a median strip at Sloat Boulevard and 45th Ave. It’s said to be the last one standing on a pole, and when it was unveiled, some 400 Doggie Diner head devotees in attendance howled, barked and cried, “Let the dog out!” 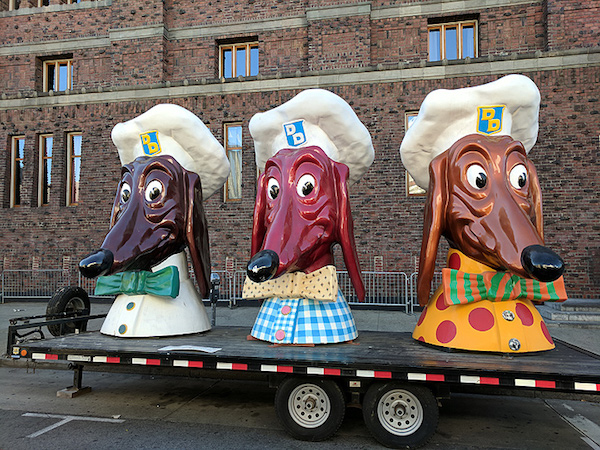 Photo of Manny, Moe & Jack by Chris Carlsson and shared via the Creative Commons Attribution-Noncommercial-Share Alike 3.0.

The memory of the Doggie Diner head was rekindled in 2000 when it was featured in Zippy comics. According to Wikipedia, in 2004, Laughing Squid, a website founded in San Francisco, sponsored three of the dog heads it named Manny, Moe and Jack – as the “Holy Dogminican Order” to take “the dogs “on a cross-country trip which ended in a show by Cyclecide at CBGB in New York City. The trip was documented in a 2008 movie called, “Head Trip.”

Doggie Diner founder, Al Ross, died in 2010 at age 93, and one hopes he was able to see how far his Dachshund heads got.