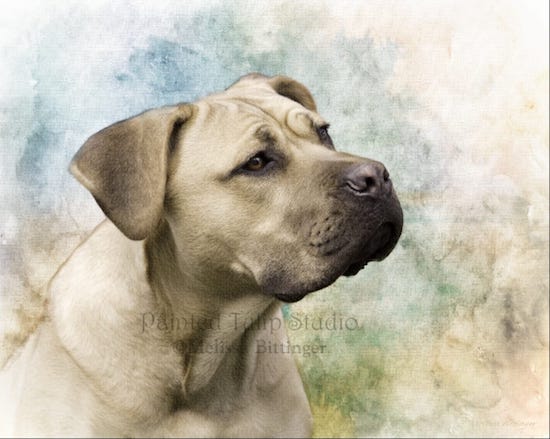 A straw stack is what it sounds like: A pile or stack of straw from which grain has been threshed. Search on the internet for “straw stack dogs,” and you’re most apt to find images of (wait for it), dogs sitting on straw stacks.

There is another meaning for the term, but as it’s more obscure (and old), it’s not going to show up in the top results of a search. It has to do with a Cane Corso color.

Back in the day in old Italy, creamy, light colored Cane Corsi were tasked with guarding straw stacks that contained hay, forage, and wheat – all the things that would feed the humans and animals. These stacks also provided shelter to the farm animals, cats and dog included. Straw stacks were an important part of farm life.

The preferred color in the dogs that guarded the stacks was straw, or, if they had a grey mask, formentino fulvo (sometimes described as white); many superstitions were attributed to coat color and a dog’s particular specialty, and old timers believed that straw-colored dogs were ‘flammable’ like straw, which is to say they had a combustible temperament. Put another way: No one was going to mess with the straw. For obvious reasons, cream colored Cane Corsi came to be called cane da pagliaio, or “straw stack dogs.”
Despite it having been around for a long time, the color caused by recessive genes and the diluting factor in both parents is not an acceptable color in the AKC breed standard. This may be because some people believe the straw color came from crossbreeding the Cane Corso with the Abruzzese Sheepdog many years ago, and thus the color is associated with impurity. Other sources, however, point out that the recessive color can crop up for any breeder, and it doesn’t necessarily point to cross breeding. To our knowledge, there are no health issues associated with the color.

In our view, it isn’t helpful to discuss only those aspects of a breed that are acceptable according to a breed standard. Potential – and sometimes inexperienced –  Cane Corso owners may not know the difference between the fawn and straw colors, or that one is acceptable in a show ring but the other is not. We share such information as a way to caution prospective owners to be wary of a breeder who “specializes” in any one coat color, or sells non-standard colors for ridiculous prices.  Too often, soundness is made secondary to producing a “rare” color, and in the end, both the dog and the owners pay the price.

Image: Cane Corso Portrait by Melissa Bittinger/GypsyWhimsArt is available for purchase as a print here