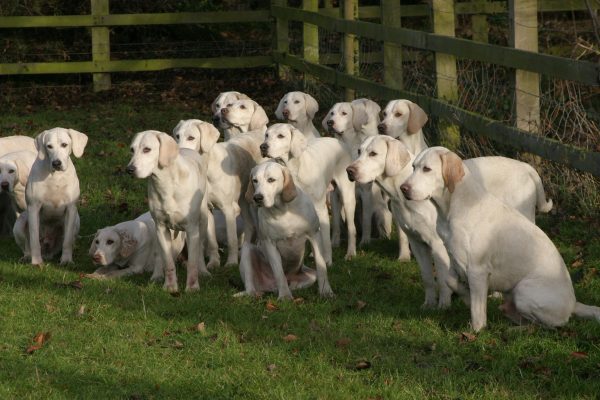 The Harrier, one of the oldest of the British scenthound breed, is usually registered with the Association of Masters of Harriers and Beagles only if they are a member of a pack and have been used for at least one hunting season. Interestingly, two distinct types of Harrier are recognized in England: The Stud Book Harrier and the West Country Harrier. The West Country Harrier is light in both coloring and type, and often the dogs are virtually all white with a very faint cream and lemon head-marking. They have no height limit. The Stud Book Harrier Hound, however,  must not exceed twenty two inches (21″ for the bitches). There are only eighteen packs of Stud Book Harriers left in the country,  and some three hundred in the world. Together, the relatively small number of these true hare hunting hounds remaining in Britain had given them “Rare Breed Status.”

Thumbnail image of West Country Harriers found on Pinterest and happily credited upon receipt of information.

2 thoughts on “Stud Book Harrier and the West Country Harrier”