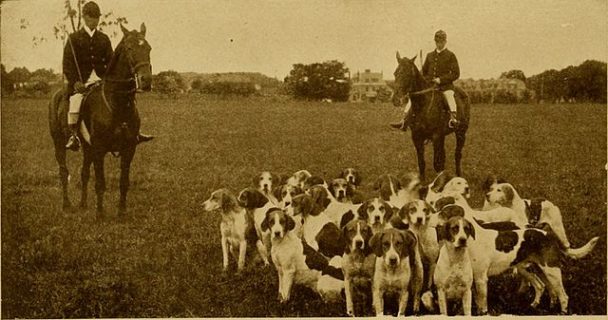 It’s a disservice to an ancient breed to be known by another breed name, but given that so many people mistake a Harrier for an oversized Beagle or an undersized Foxhound, we suppose the moniker of “Super Beagle” is understandable, but the Harrier is “super” in its own right.

Two different types of hound were bred over several centuries for their working qualities related to the hare, and the Harrier was one of them.  Believed to have been developed in 13th century England by Sir Elias de Midhope, the Harrier is considered to be one of the oldest English breeds of dog. Some believe that the breed got his name from the Old English word ‘harry,’ meaning to annoy, others that the name, “Harrier,” was developed from the word, “hare.” Yet another source writes that the breed name is derived from the Norman French word,”harier,” which means hunting dog – especially interesting because the first written record of the Harrier comes almost two centuries after the Norman invasion.

According to the Harrier Club of America, “Welsh” or “west country” Harriers still exist,  and they appear separately in the AMHB Studbooks. Interestingly, Harriers are not registered with the Kennel Club in its own country of origin. The Kennel Club did recognize the breed from 1851-1971, but the last time Harriers were shown at a Kennel Club show or entered in their stud book were in 1915.

Today, Harriers in England are registered with the Association of Masters of Harriers and Beagles, but they are a breed without a job. Animal rights groups successfully outlawed hunting with hounds in Scotland, England and Wales, though hunting with hounds remains legal in many countries, including Northern Ireland where the Harrier is the most commonly used hunting dog. That said, the Harrier is rarely kept as an indoor companion pet in the United Kingdom, its home country, and its extinction in England is quite possible. It is a scarce breed in the United States, and typically is towards the bottom of AKC registration lists. In all of 1999, for example, only 24 Harrier puppies were registered with the AKC in the entire US.

Image: Harriers of his Majesty George III  from a painting by B. Marsliall by Internet Archive Book Images – https://www.flickr.com/photos/internetarchivebookimages/20365737094/Source book page: https://archive.org/stream/dogbookpopularhi02wats/#page/n477/mode/1up, No restrictions, https://commons.wikimedia.org/w/index.php?curid=43255180

5 thoughts on “The Super Harrier”