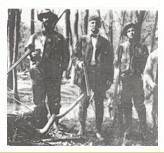 The first Boykin Spaniel is believed to be a small, stray spaniel-type dog that befriended a banker walking to church in Spartanburg, South Carolina around 1905-1910.

The banker, Alexander White, liked the little dog, took it home, and named him “Dumpy.” When “Dumpy” showed a talent for retrieving, White sent the dog to his longtime friend and hunting partner, Whit Boykin, a land appraiser, planter, and well-known sportsman of the community just outside Camden, South Carolina. Under Boykin’s tutelage, “Dumpy” developed into a superb turkey dog and waterfowl retriever, and became the foundation stock for the Boykin Spaniel.  With his relatives, the Canteys, Boykin experimented with many breeds to resolve the problems posed by their Wateree River hunting trips. With selective breeding and a little luck, Boykin developed a small multipurpose retriever now known as the Boykin spaniel.

Boykin Spaniels, affectionately nicknamed Swamp Poodles or Little Brown Dogs, became ideal for hunters on the Wateree River who needed a small rugged dog that could retrieve on land and water. The dog’s size was especially ideal to fit into “section boats” which were held together by bolts to form a large craft, its three sections with seats removable so they could be “nested.”

Photo believed to be of Whit of Boykin and kin