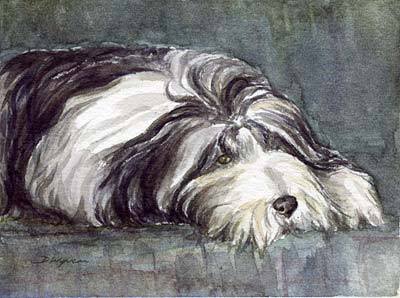 Poor Dr. Stanely Coren. People either hang on his every word, or they dismiss him.

In his book, Why We Love the Dogs We Do, Coren says that choosing a breed is like choosing a spouse, and that we’d better understand our own personality before making a long term decision. We can’t really argue with that.

Coren goes on to say that Type A personalities (highly competitive, stressed, driven and ambitious) do best when they have a “Type B” breed. We’ll get to you Type B people later, but for now, if you are a Type A person, Dr. Coren says you should consider these breeds: Basset Hound, Bloodhound, Boston Terrier, Bulldog, Cavalier King Charles Spaniel, Clumber Spaniel, French Bulldog, Great Dane, Great Pyrenees, Irish Wolfhound, Newfoundland, Pekingese, Pomeranian, Pug and Saint Bernard.

“Ligier,” the Bearded Collie (a breed not on either list) in watercolor by Diane Wynen
http://www.madigan-wyndian.com/