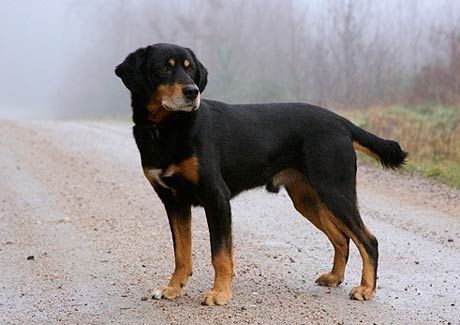 With a celebrated past dating back to the 1600s, the Smaland Hound, or Smålandsstövare, is believed to be Sweden’s oldest scenthound, as well as its smallest. Unlike most of today’s “designer” breeds, however, this one was created out of necessity.

Back in the day, Swedish farmers needed a dog that could hunt alone since they didn’t have expansive kennels loaded with hunting dogs that could work as a pack. They bred their local spitz-type farm dogs to the offspring of European hounds from Germany, Poland, and the Baltic regions that had been brought in to Småland, Sweden after the Great Wars between 1611 and 1718. Resulting puppies were the foundation stock for the Smaland Hound.

Sweden has long had a deep connection with its hunting dogs, nature and wildlife always having been important values in a country where hunting was a way to survive. Today, hunting is an essential aspect of wildlife management and recreation, and as such, there are over 200,000 dogs in Sweden representing 95 different gundog breeds kept primarily for hunting. This relationship was founded on early breeds like the Smaland Hound. This robust, hardy dog developed into an all around hunting dog typically used to hunt smaller squirrels and rabbits, though it wasn’t unheard of for the hounds to pursue prey as large as a moose, and it was a terrific choice for farmers who had neither the space to keep several bigger dogs, nor the funds to keep more than one.

Sadly, breed numbers declined over time, possibly because hunting breeds were influenced by the population sizes of game species. By 1950, breeders had to intervene with the addition of new bloodlines. They added dogs of similar type (sometimes with an unknown pedigree)  to keep the breed from going extinct or weakening from inbreeding. Doing this served to strengthen the breed’s gene pool while maintaining its overall phenotype, and it worked: Between 1994 and 2008, the breed’s Swedish breed club began commissioning genetic testing on a large sample of dogs and no specific genetic health issue unique to the breed was found. Indeed, it was determined that this is a very healthy breed.

The Smaland Hound/Smålandsstövare is still a rare breed that is practically unheard of anywhere except for Sweden. Even there, however, breed numbers are extremely low and fewer than 100 new dogs are registered each year.  The FCI does recognize the breed, and in 2006, the United Kennel Club did as well.