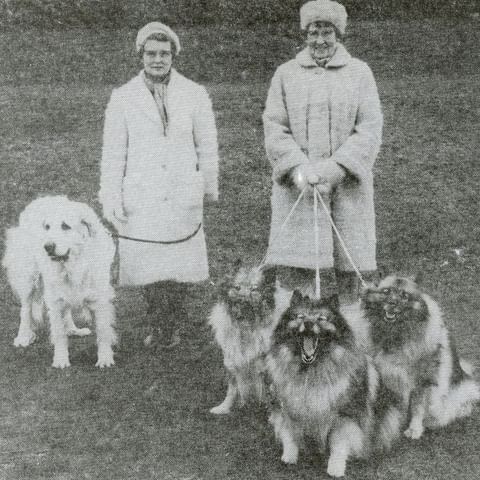 World War II was a period of scarcity and deprivation. Meat, lard, shortening and food oils, cheese, butter, margarine, processed foods, dried fruits, canned milk, firewood and coal, jams, jellies, and fruit butter were all rationed by November 1943, and soon to be limited were typewriters, gasoline, bicycles, shoes, rubber footwear, silk, nylon, and fuel oil.  Certain items became flat out luxuries.  Of all things, knitting wool was also exceedingly hard to find, and very pricey when it was located.

It’s curious how times of hardship can contain the seed of opportunity.

Enter Lady Waechter. She had placed an advert seeking a country home for two Keeshonden who’d been rescued during the London raids of the war. A certain Mrs. Fry from the Isle of Wight answered the ad and took in the dogs named “Andy” and “Ferdie.”  Perhaps after a few days or weeks, Mrs. Fry got an idea, and one can almost picture her studying the dogs from across the room as she got it. Could Andy and Ferdie’s dog hair be made into knitting wool?

Today, we call yarn spun from dog hair “chiengora,” and it’s nothing new. Dog hair has been found in yarns dating back from pre-historic Scandinavia, and in textiles from the Navajo and Northwest Coast native Americans of North America. It was the main fiber spun on the Northern American continent before the Spaniards introduced sheep. In England in the 1940s, however, yarn made of dog hair was probably regarded as an odd novelty, if not a last resort.

Mrs. Fry began to experiment. She took the hair that she had brushed out of her dogs, or that they had shed, and after carding and spinning it, she found that the hair made a thick yarn that was warm and water resistant. As the AKC Library & Archives noted when sharing the photo seen here of Mrs. Fry and a friend, the clever Mrs. Fry’s equally clever husband developed an electric wheel that enabled her to improve her production rate from one ounce of hair per hour to ten ounces of hair per hour. Word spread, and Mrs. Fry started to demonstrate her skill for women’s clubs and organizations, and in so doing, she spread awareness of the Keeshond breed. Soon, newspapers, television, and even the comic section of newspapers carried stories of Mrs. Fry and her Keeshond hair-spun wool.

Happily, yarn is more easily acquired today even as some items are being rationed during the time of Covid (i.e., hand sanitizer, toilet paper, disinfectant wipes, rubbing alcohol), but chiengora is no longer a curiosity. In 1990, Dog Fancy magazine reported that “more and more people are discovering the beauty and warmth” of what it labeled “chiengora chic.”  A Los Angeles Times article mentioned Liz Kusak, and that when she wove an Afghan, it was actually a Keeshond. With a little bit of humor, the writer added that, “When she wears her creations around her Canoga Park neighborhood, she adds a new dimension to walking the dog.” A 12-year-old Keeshond named, “Cindy,” to be exact.

We noticed that Pinterest has pages named “Chiengora,” and one of them can be seen here. Perhaps it will inspire you.

Image: Mrs. Fry seen here in hat and coat made with wool from the dogs pictured.  She is seen with a friend who is wearing a coat spun from the chiengora of a Great Pyrenees.