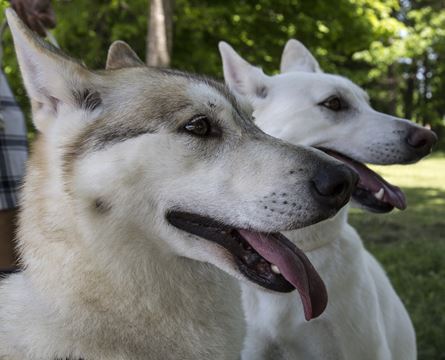 It’s difficult to say at this point if the Tamaskan Dog should be considered a breed, a breed-in-the-making, or something else. For now, we leave it to others to decide as we’re more interested in sharing what we do know about the Tamaskan Dog.

Back in the 1980s, the United States exported five dogs of husky type to the UK.  These dogs were subsequently bred to Siberian Huskies, Alaskan Malamutes, and German Shepherd crosses (the origins of all the dogs mentioned thus far remain unknown).  The goal was to create a good tempered, good working family dog that resembled a wolf.

Other dogs were added by breeders over the years, but no records were maintained and breeding programs weren’t documented, so no one is sure of the exact breeding programs. The resulting dogs were called “wolf-dog,” which was changed to “Northern Inuit” around 1988, mostly because the dogs didn’t actually contain any wolf in their immediate ancestry.  The Northern Inuit Society was formed, but as is often the case, differences in opinion concerning how to develop the breed in the future lead to splits and name changes. More new blood was added when dogs being bred for sled pulling in extreme temperatures were found in Lapland that had the all important wolf appearance, but also good health and temperaments. Seven of these dogs were imported and the Tamaskan breed (Tamaska means “mighty wolf”) rose from the ashes of the original Utonagan Society (the name that came after the “Northern Inuit”). In 2009, the Tamaskan Dog Register introduced a Saarloos Wolfdog as a “one-time only” out-cross to bring some fresh blood into the breed.

According to the National Tamaskan Club of Canada, there are now only 38 legitimate, registered Tamaskan dogs in all of Canada, and about 600 in the world.  The club notes that there are puppy mills grinding out fake Tamaskan puppies at an alarming rate, and the names of these unethical puppy mills are listed at Tamaskan-dog.ca.

As for the dogs themselves, they are said to be stubborn, sensitive, and recommended for positive, confident owners experienced with inserting persistence in their training. They are large, athletic dogs slightly taller than German Shepherd Dogs, but smaller than the Alaskan Malamute.

These dogs are making inroads. A Tamaskan named “Genghis Khan” was featured as a wolf in a music video for the band Lucretia Choir, and in 2010, a male Tamaskan named “Wave” became the official Live Mascot of North Carolina State University’s football team, the NC State Wolfpack. Wave (aka “Tuffy”) now attends most home games and can be seen on the sidelines. Read this nice article on how “Luchta” helped with the local production of the play, The Crucible, from which our thumbnail photo by Mark Bergin appears. Another article on the play can be read here.