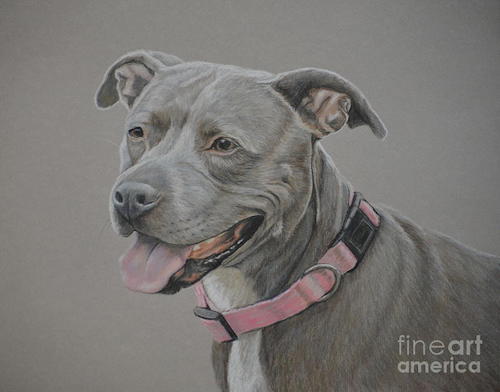 Most experts contend that the white English Terrier, Black-and-Tan Terrier. perhaps the Fox Terrier was crossed with the Bulldog to create the Staffordshire Terrier. Originally, it was called the Bull-and-Terrier Dog, Half and Half, and sometimes, the Pit Dog or Pit Builterrier. Later in England, it became known as the Staffordshire Bull Terrier.

The breed made its way to America around 1870, where they became known as Pit Dog, Pit Bull Terrier, later American Bull Terrier, and still later as Yankee Terrier.

In 1936, they were accepted for registration in the AKC Stud Book as Staffordshire Terriers, but inn 1972, the name was changed to American Staffordshire Terrier. Why? Breeders American country had developed a type heavier in weight than the Staffordshire Bull Terrier of England. The name change was to distinguish between the two and recognize each as its own breed.

Our homework hints that in the 1990s, San Francisco tried to change the breed name to the St. Francis Terrier, and in 2004, New York City Animal Care and Control tried to rename the dogs, “New Yorkies.”