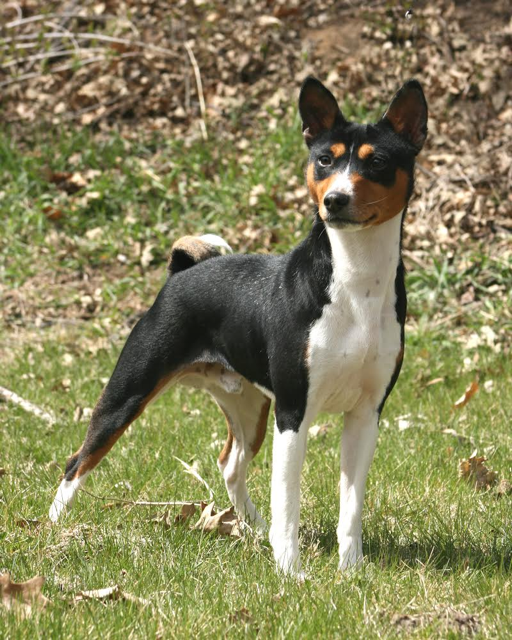 The AKC breed standard for the Basenji shows no disqualifications for color (or anything else, for that matter), but the color pairings of black and white, red and white, black tan and white, and brindle and white are considered to be standard, and are the four most commonly seen colors.

There are other colors that can appear with the white: Mahogany, sable, blue cream, black brindle, and cream. Whatever the color, the areas in which they appear on the dog should be well delineated and not “bleed” into white areas (we’ve seen the term, “fula” used to describe white that “bleeds” or “blends” into color areas). Whatever the color pairings, the dog should have white feet, a white chest, and a white tail tip.

There is another color combination, one that we find quite stunning, and that is the Tri-Color (seen in the image above). White appears where one expects to find it, but the rest of the coat is a striking deep black with chestnut colored eyebrows or pips, cheeks, and sometimes on the inside of the dog’s upper legs, the base of his ears, and his inner ears.

Breeding two tri-colored Basenjis will always result in a litter of tri-colored puppies, but two tri-factored dogs (which means they don’t exhibit tri-coloring, but they carry it) can produce a litter of pups in the recessive traits of black, red, brindle, tri and something called “trindle.”  A trindle (or brindle-pointed tri) is a tri-color Basenji, but with black stripes/brindle marking on all of its tan points (see inside the orange dotted oval below) not seen on the other Basenji’s tan points.  The black overcoat which makes the tri-color pattern is genetically separate from the base color of red or brindle: 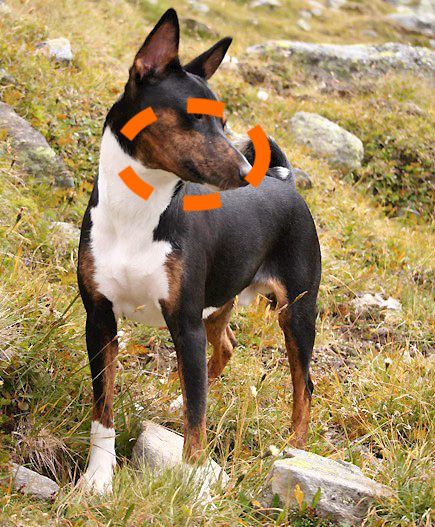 Breeding two brindles or a brindle to a tri will produce both brindle puppies, and red and whites pups. But if two tri-factored brindles are bred, one could expect the litter to have reds, brindles, tris, and trindles.

A trindle is not recognized by the AKC, per se,  but is registered with the AKC as a tris. While they are not usually bred for specifically, trindles have been shown in conformation rings, and they’ve not only earned champion titles, but one trindle has already won an all-breed Best in Show. Some fanciers, however, believe that trindles “muddy” the crisp lines of the tri-color.  We leave that debate for Basenji fanciers, and are sharing this bit of information in the spirit of education.

Image: Photo of a true tri-color Basenji: CH AB No Quarter Given at Melar, aka “Chaz” by Melody Falcone
https://www.facebook.com/melodyfalconephotoanddesign/

3 thoughts on “The Tri-Color Basenji”