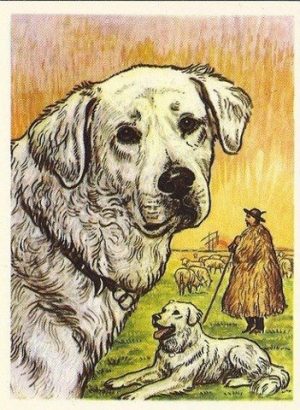 Written documents from the early 17th century already mention the Kuvasz as an individual breed, and Ferenc Pethe’s Természet-História és Mesterségtudomany published in 1815 included a drawing of a Kuvasz – but the breed was older, much older, than either of those references.

Magyar tribes traveling on routes around 2000 BC and conquering the Carpathian Basin in Hungary brought with them the “Ku Assa” (or “Dog of the Horse”), and later in the 13th century, the Kuvasz was used by Hungarian shepherds. Certainly it’s known that the “Ku Assa” was a favorite of King Matthias in the 15th century. He had established his own breeding program, and so trusted these dogs that he not only kept a brace or more around him at all times, but relied on them over his Royal Guardsmen. It’s not the dogs’ fault that Matthias allowed Count Dracula to marry his daughter. If the real Dracula looked anything like Gerard Butler in Dracula 2000, well, just saying.  But we digress.  With the Ottoman-Turkish takeover came a new evolution of the name to “Kawasz,” meaning “nobility’s armed guard.”

In 1978, a fossilized canine skeleton was found in Fenék Pusta. It was almost identical to the modern Kuvasz making it the oldest identifiable breed dated beyond the 9th century if proved accurate.