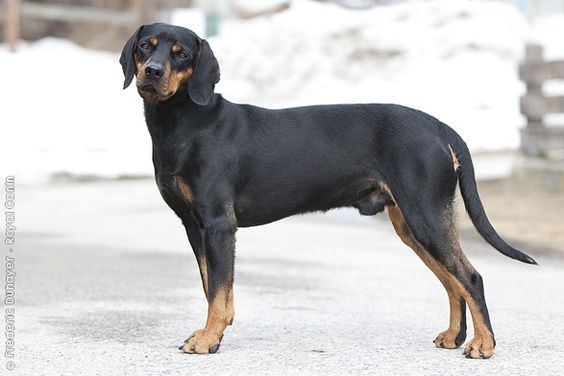 The breed was developed after Latvian hunters were banned from using their long legged Curland Hounds in Latvian forests.  We sidetrack for a moment to mention how interesting the Curland hounds were in, and of, themselves.

Latvian forests were divided into 1600 foot square units with open space between the units. Hunters were forbidden to enter the forests with their guns and had to wait in the open spaces in the hopes that game would wander out. Enter the Curland hound. During a hunt, “beaters” with dogs lined up at the far side would take off when a horn was blown. The idea was for the hounds to drive deer or boar out to the hunters. It took a spectacularly obedient dog to take on this role, and the Curland Hound performed it admirably.

And then it all came to a stop in 1920. The Forestry Department banned long legged dogs in a bid to protect game animals, and that essentially saw an end to the Curland Hound.  We honestly don’t know if any Curlands are around anymore.

Latvians still needed to eat or wanted to hunt, so a new breed was developed that wouldn’t exceed the mandated limit of 20 inches in height. They crossed their existing Curland Hounds (sometimes seen written as “Courland Dog Hound”) with Beagles and Dachshunds and got the shorter dog they desired, and one that retained the drive to hunt.

Around 1947, the Council of Hunters and Fishermen of the Latvian SSR determined to “fix” the Latvian Hound as a unique breed. It wasn’t easy, but forty of the smallest hounds were found and used as the foundation of a breeding program. By 1971, the Latvian Hound was breeding true, and a standard was written.

This is a sweet and affectionate dog that is also a remarkable hunter.

2 thoughts on “The Answer to a Ban on Long Legs”