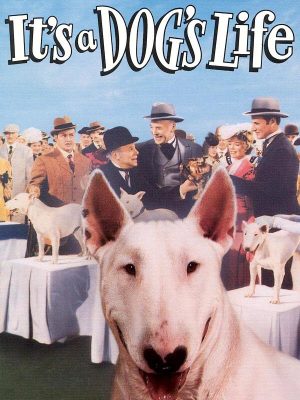 Richard H. Davis was Philly born, Lehigh and Johns Hopkins Universities educated, and literarily employed. In 1890,  he was the managing editor of Harper’s Weekly, but he also served as war correspondent for the London Times and the New York Herald from 1898 (the Spanish-American war) to World War I when he was a war reporter with the French and British armies in Serbia.

Somehow, Davis found the time to write travel books along with some fiction, among them Gallagher and Other Stories, Soldiers of Fortune, and The Man Who Could Not Lose. Throw in a few plays (Ransoms Folly, The Dictator, and Miss Civilization) and Mr. David was a very busy man. As far as we’re concerned, however, his most noteworthy contribution to literature was The Bar Sinister published in 1903. It is a Horatio Alger-style rags-to-riches story of a “Wildfire,” a Bull Terrier,  but told from the dog’s point of view.  More than one person has opined that it’s one of the best short stories they’ve ever read.

The book was the inspiration for the 1955 film, It’s a Dog’s Life. Enjoy this three minute clip from the movie:

Some might say the story and the movie were a bit sentimental, but these days, who can’t use a little sentimentality?

Fanciers will enjoy the scene in which Wildfire is entered in a dog show at Madison Square Garden. There, our canine hero faces a chance at revenge – but you’ll have to read the book or watch the movie to learn more about the circumstances and outcome.

It’s hard enough to get information about dogs who appear in more recent movies and commercials (why do movie makers not know that we’re interested in their canine actors?),  so it’s near impossible to learn about the Bull Terrier who appeared in the movie made sixty-six years ago. We know that he was the winner of a Patsy Award for “Animal Star of the Year,” but nothing more. If anyone has more info, we’d love to hear it!