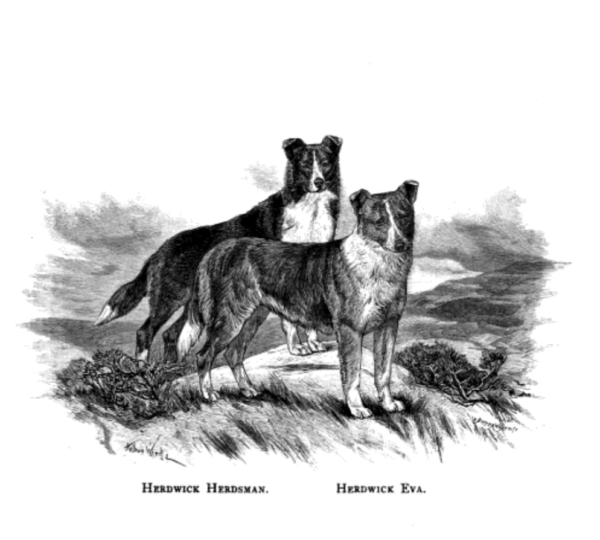 Back in the day, Smooth Collies were referred to as “bare-skinned,” and not because their hair was shorter than the Rough Collie’s, but because the two base color genes in Collies – brown (aka sable, the dominant color) and black (aka tri color and a recessive) – made some country folk think of bear skin rugs: Black or brown, dense and waterproof. This, according to judge and breeder, Iris Combe.

Interestingly, both the Smooth and the Rough have about the same number of hairs inch per inch, but because the undercoat and harsher textured outer coat on a Smooth contains more oil, it’s more water resistant and less likely to have snow, mud, or vegetation tangled up in it. For that reason, it was the preferred variety not just among farmers and shepherds, but among those who competed in herding trials. In the August 14, 1890 issue of Forest and Stream, a monograph written by Rawdon B. Lee reads, “At the Trials, the smooth-coated dogs, as a rule, more nearly approach the show bench form than do their rough-jacketed cousins, for speed and endurance are required rather than long woolly coats, huge ‘frills’ and ‘brushes’ big enough to disgrace the best that ever hurry behind the boldest of bold reynard.”

By most accounts, all Smooth Collies can be traced back to a Trefoil, a tricolored a Galway Collie born in Ireland in 1873, though initially, we were puzzled by reports that three years earlier in 1870, a dog show offered a separate classification for Smooth Collies, and the first smooth to win in a separate class for the breed happened in 1872 when “Nett” took the honor. After some digging, we came to understand the distinction that with Trefoil, the tricolor line of Smooth Collies began.

Certainly, attention to the breed was heightened with Queen Victoria’s purchase of some of the dogs in 1860, and it became fashionable to own the smooth coated Collies that Her Highness had fallen in love with on visits to her Scottish retreat.

Another thing that puzzled us was H. E. Packwood’s comment in Show Collies Rough and Smooth-Coated published in 1906 in Manchester, England. He wrote that smooths had made good progress in the previous ten years and were equally as good for show or shepherd work as their rough brothers. Evidently, Packwood missed the proverbial memo that four years earlier, a dog named Eng. Ch. Babette of Moreton had won the Challenge trophy for Best Collie of Any Variety at the Collie Club show. We don’t know if Packwood would learn of Eng. Ch. Laund Lynne. Whelped in 1917, Lynne had an illustrious show career, and by the way, she herded sheep and cattle, and retrieved. She won 17 challenge certificates, and was placed Best in Show all-breeds or Best Bitch in Show 95 times.  Her record included the cup of Best of All-Breeds at the English Kennel Club show.

Who can tell us which Smooth Collie won the first Best in Show?

Our image is the engraving, “Herwick Herdsman and ‘Herdwick Eva,” by Butterworth