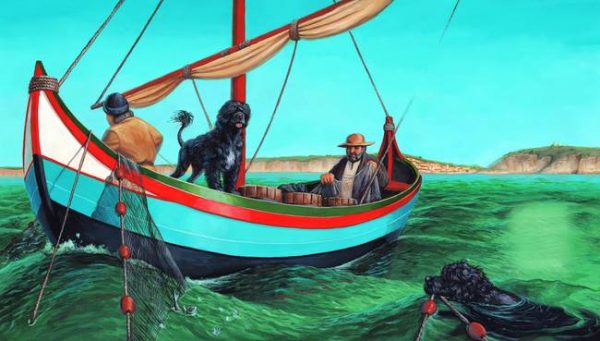 With no one around to dispute the facts, there are few things as debated as the early origin of many of our dog breeds. God love the person who kept notes, breeding records, and pedigrees, but precious few did. This was due, in large part, because historically speaking, dogs were considered to be no more interesting a topic to write about than the plow in the field. Some breeds are so old that they predate written records, another reason so many breed histories include the phrase, “lost to the mists of time.”

Meet the Berbers.  Some historians say their name was a variation of the Latin word, barbarian, and that should give you a hint about them.  Fierce and hostile, the Berbers spread across the face of North Africa to Morocco. Along the way, they picked up some Asian dogs, and it was the descendents of the Berbers – the Moors – who arrived on Iberian Peninsula in the 8th century bringing these water dogs with them.

We also want you to meet the Goths. They were a Germanic people who were major players in the fall of the Western Roman Empire and the emergence of Medieval Europe. Earlier, these tribes lived on the Eurasian Steppes, but when this federation of tribes left the flat grasslands, some of them headed west – the Ostrogoths, and their dogs were the ancestors of the German pudel. The Visigoths, meanwhile, went south to fight the Romans, and their dogs, it’s said, became the Lion Dog.

We wanted you to “meet” the Berbers and the Goths because cynologists think that one of the two introduced ancestors of the Portuguese Water Dog to the area known as Portugal. There is a third theory (there always is, chuckle) that both theories are wrong, and that dogs working the cattle, sheep, horses, etc., of people who lived on the wild Central Asian steppes near the Chinese Russian border were the real early progenitors of the PWD. Isolated from the rest of the world, the dogs developed into a definitive type very much like the Portuguese Water Dog.

Whatever theory one favors, any of them can explain how the Poodle and PWD might have developed from the same ancient gene pool. Even more intriguing is that in very early times, a group of Celts and Celticized peoples living on the central-eastern Iberian Peninsula during the final centuries of BC migrated from lands now belonging to a part of Germany. These Celtiberians, as they are known, traveled over the Pyrenees, established settlements in Iberia, but also in Ireland, Wales and Brittany. Some cynologists believe that the Irish Water Spaniel is a descendent of the Portuguese Water Dog.

We’ll never know with certainty, but what we do know about these people, their dogs, where they traveled, and where they settled make the possibilities tantalizing.