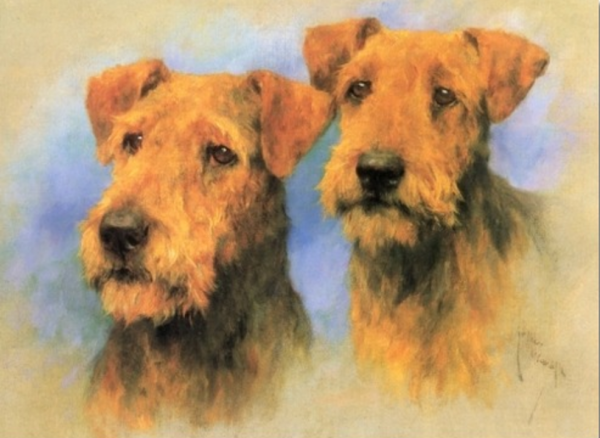 We don’t know why the Airedale Orchestra renamed itself in 1982 from the Keighley and District Orchestral Society, but perhaps it’s the same reason why the Bingley Terrier was renamed the Airedale Terrier. The former is widely recognized as one of the leading community orchestras in the north of England, while the latter was named for its popularity in the valley of the Aire, also in the north of England. It’s a bit more puzzling why the breed was renamed after the Aire when Bingley is also a geographical spot – a market town in West Yorkshire also situated on the River Aire (we assume that the “Bingley” in Bingley Terrier referred to that town).

The other early name for the Airedale Terrier, the Waterside Terrier, originated because the breed was bred to hunt otters.  Pretty straightforward, that one. Anyone who wants to study this topic more in depth may be interested in a piece written by by Hugh Dalziel from the book, “British Dogs: Their Varieties, History, Characteristics, Breeding, Management, And Exhibition.”

Two Airedale Terriers by Arthur Wardle (1860 – 1949)  an artist we believe was a master at “nailing” the expression of terriers.