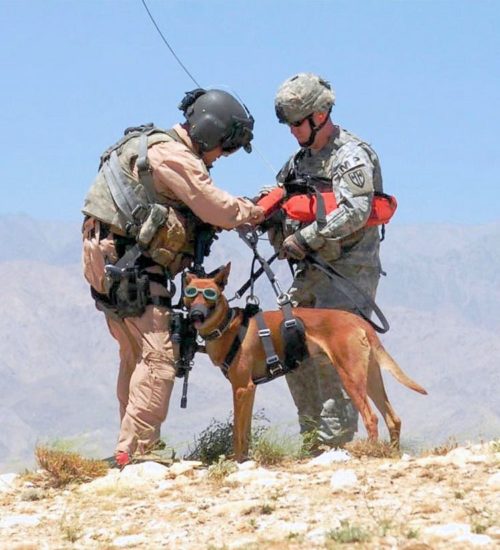 Police and military dogs have a Border Collie named “Midnight” to thank for their eye protection.

It all started one late afternoon in 1997 when “Midnight” kept missing a plastic disc thrown for him.  This was a first for the dog. His owners, Roni and Ken Di Lullo, came to notice that sunlight caused their dog to squint, and of course, the sky is exactly where Midnight was looking for the Frisbee.

Roni got creative and experimented with human sunglasses and sports goggles before she fashioned a pair that would fit Midnight’s head. In the end, however, the software programmer from Hewlett-Packard realized that she was going to have to create a pair from scratch if the idea was ever going to work on a dog’s head shape.  “I made the designs in a CAD program,” Di Lullo said.

It didn’t take long for other dog owners to notice and ask if they could get a pair for their own dogs. Roni and Ken consulted with an eyewear manufacturer to develop a prototype and invested $25,000 on the idea, but at that point, the couple was selling Doggles more as a hobby than anything else. The pair had just become new parents, and, well, they were busy!  Once they realized that there was an actual market for the concept, it took on a life of its own. 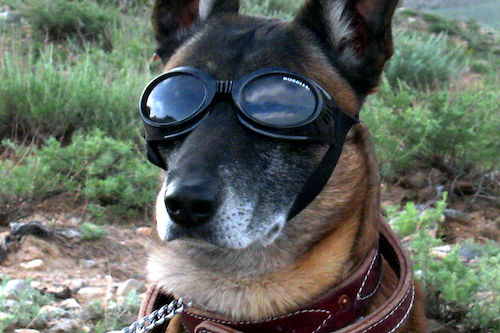 Three things happened in the coming years that made a difference.

Then, Roni cold-called Petsmart using their the toll-free number. “How do I submit a product?'” she asked, and in response, she was given an address which she used to mail the company a pair of Doggles. Weeks later, she got a letter (not an email!) from Petsmart saying that they wanted the product.

In all of their stores.

Enter Linda Cunningham. in 2004, she was organizing supply packs to be sent to U.S. Army dogs working in Iraq where sandstorms and harsh sunlight were problematic for the troops and their dogs. Cunningham came across Doggles after doing a little research and contacted Doggles.  One hundred and twenty pairs of Doggles were to Iraq for the military working dogs, a story that CNN featured on a Saturday Morning News segment.

A couple of years later, and the British newspaper Metro reported on the dog suffering from a rare autoimmune disorder that prevented his eyes from producing tears. The dog’s owner, Diana Stephens, mentioned that the dog wore Doggles to prevent its eyes from drying out.

When the safety and quality of a dog’s life is vastly improved by a great idea, no one can begrudge that idea being rewarded.

In 2015, sales were $3 million. One presumes that five years later, sales are even better.

In the interest of providing more information on the use of Doggles, you may want to read the article written last year by W. Jean Dodds, DVM: Dog Sunglasses: Fashion Statement or a Health Necessity.

If you use Doggles, know that it was a Border Collie and his owners who made it possible.

Thumbnail image: A Malinois name, “Rronnie” is prepared by her handler to be hoisted by a helicopter near Bagram, Afghanistan, in 2007.  Photo by Spc. Aubree Rundle/US Army