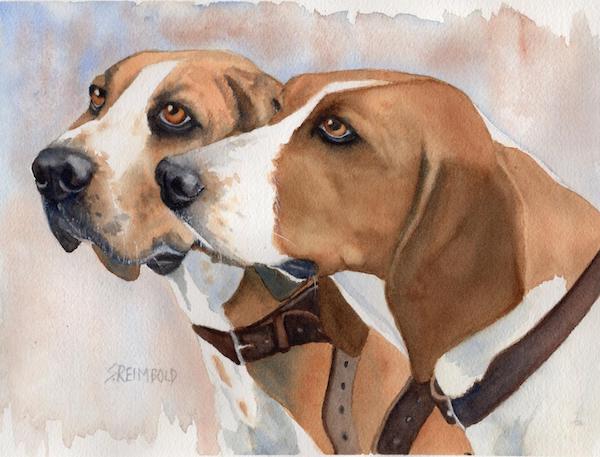 We don’t know if it’s true, but the Great Book of Dogs wrote that an American Foxhound is “capable of tiring out ten horses. Indeed, he can run around an area of 93 square miles without stopping from dawn to dusk, finally returning home perhaps in the middle of the night with energy to spare after lingering over the last lap.”

Even today, the breed’s stamina and love of running make him a great jogging partner, but his endurance is not an accident. A descendant (close cousin to) the English Foxhound, the American Foxhound was bred for life in the New World because topography in America was decidedly different from that in England.

Foxhounds were breeding true among the British upper crust, and the affluent settlers who established domiciles in the New World weren’t inclined to give up their sport simply because of a change of address. The first record of Foxhounds in what is now the United States comes from 1650 when Robert Brooke imported a pack into Maryland. Later on, Brooke became the first Master of the Hounds, but we digress.

The dogs that new British immigrants brought from England to hunt on their new estates in Virginia and Maryland – in a word (and pardon our French) sucked.  The dogs struggled in hotter temperatures, they struggled in terrain that was more rugged and less developed, and they were confounded (if not out beat) by the critters they encountered because cougars, bears, boars and bears were nasty! Add to this swamps, marshes, high mountains, and a whole lot of forests that they’d never encountered before, and the dogs were wholly unsuited for their new home. The dogs had to be bred in a way that would help them survive their new condition.  British Foxhounds were mixed with Bloodhounds, other English hounds, Irish and Scottish hunting dogs, and, some say, dogs owned by Native Americans.  By the middle of the 1700s, American Foxhounds were so different from English Foxhounds that they were considered an entirely different breed.