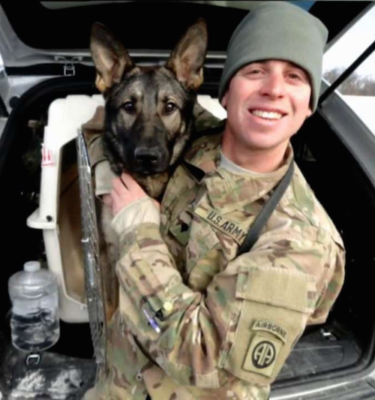 Our curiosity was piqued after watching the heartwarming video below:

What, we wondered, is a “Czech Shepherd?”

After a little homework, this is what we gleaned:

After World War II, Czechoslovakia shared a border with East Germany, and dogs were bred in relative isolation that was restricted to the border stations on that border. The majority of these dogs were remnants from the former East Germany, but dogs from the Czechoslovakian Army’s border patrol, or Pohranicni Straze, were also used in the strict breeding program.  For anyone who’s wondering, Czech line German Shepherds and East German DDR German Shepherds are essentially the same bloodline.

As compared to German Shepherd Dogs we’d see in America, Czech German Shepherds tend to be smaller,their ears are often slightly smaller, and instead of the traditional saddle coloration, most are more uniform in color ranging from a wolfish grey (like “Ikar” in the video) to dark brown, and even solid black. Some people think Czech Shepherds also have slightly more wolfish features than other lines.  The dogs were bred to be working dogs, and we discovered that Czech Shepherds are often preferred by both military companies and police organizations for their agility, strong work ethic, and tremendous tracking ability.

15 thoughts on “The “Czech Shepherd””