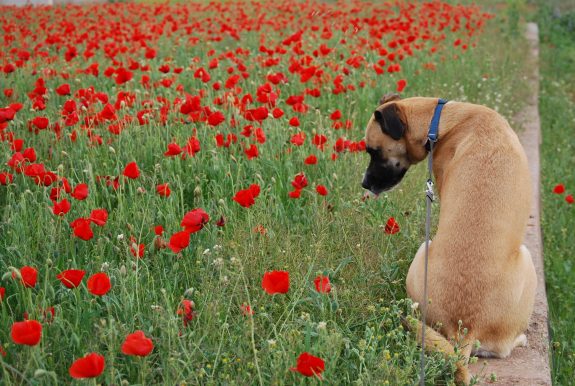 In our series on the Black Mouth Cur, we aim to touch upon some of the lines developed by individuals and families, some going back a hundred years. This isn’t to suggest that all the lines, often differing from each other in size, coloring and working style, are in themselves purebred BMC because at least one of them recruited other breeds in its development. Our goal is simply to provide readers with the least they need to know about “what’s what” should they come across a name or term.

We’ve already posted about the Ledbetter;  in this brief piece, we do a cursory exploration of the Carnathan Black Mouth Cur, the line created when Howard Carnathan bred his Black Mouth Cur, Bruno, with a wide variety of females from other breeds. His goal was to create an exceptionally well-rounded dog, not necessarily from a clean bloodline, so consequently, some of the dogs he bred are recorded outside of actual Cur lines. Not surprisingly, his dogs exhibited a wide variation of phenotypes that included  “striped” and “brindled” curs, dogs that were typically larger, shorter, broader, and more muscular than the other lines. Carnathan dogs evolved into two more “branches,” the Southern Blackmouth (not the same as the original Southern Black Mouth Cur) and the American Blackmouth, but both are traceable to Carnathan’s dog, Bruno. As for Bruno, it’s written when the United Kennel Club recognized the breed, it was Bruno’s image used in the standard.

We’ve also read that the differing bloodlines of Black Mouth Curs is why the breed has not been accepted by the American Kennel Club as a registered purebred (though the AKC does have the Mountain Cur in its Foundation Stock Service). We don’t have an explanation as to why the BMC was accepted by the UKC and not by the AKC, but suspect that the UKC’s strong focus on working breeds may offer a hint. Black Mouth Curs are courageous workers, dogs so quick to learn a task that they are regarded as a truly versatile breed. The Carnathan line, for example, produced “tree dogs,” but dogs also used on cattle or hogs where their size was an advantage.

As for Howard Carnathan, the gent died in 2018 at the age of 78. We came across his obituary which described a colorful chap:

“Joseph Howard Carnathan…He was born July 19, 1939 to the Late James Russell and Elsie Mae Carnathan. He was a 1958 graduate of Mooreville High School. He prided himself as being the very first Elvis Presley impersonator, he didn’t think it was a big deal but his family thinks it’s pretty cool. He worked most of his life managing auto parts stores in Mississippi and Alabama. He was also an insurance agent for several years. He was a member of Crossroads Christian Church. He was an avid St. Louis Cardinal fan and enjoyed watching Alabama Crimson Tide football. His greatest passion was raising and breeding Southern Blackmouth Curs, which he had shipped all over the United States and several foreign countries. He wrote the breeding standard and registry for the Curs and registered the very first dog. He was an avid hunter.”

Image: We lack permission to use the image of a Canathan Black Mouth Cur, and share instead this stock photo of a BMC from Adobe Stock photos