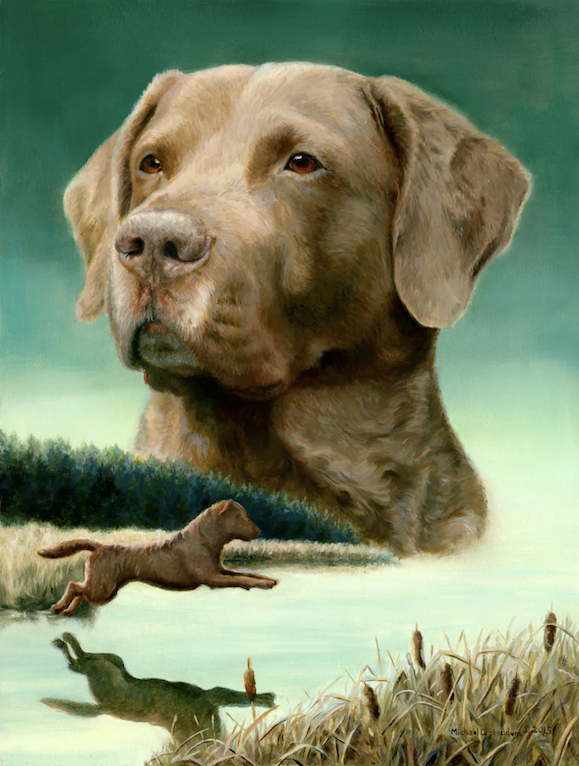 In dog fancy parlance,  a “head breed” is one in which the breed standard places emphasis on a good “head piece.” For example, the Collie standard reads: “The head properties are of great importance.” Some would add that a “head breed” is one in which there a lot going on with the head, while others would argue most breeds are “head breeds” because the head is usually the one feature that is unique and instantly sets the breed apart from all others. That last statement would qualify the Chesapeake Bay Retriever as a “head breed” because its head type distinguishes it from other retrievers by reflecting its Newfoundland ancestor.

By way of background, the Chessie originated from two Lesser Newfoundland pups that survived a wreck off the coast of Maryland in 1807.  After the American ship, Canton, rescued the crew and the two pups, “Sailor” and “Canton,” the dogs came into the hands of Governor Lloyd and Dr James Stewart. They were bred with local breeds, their offspring trained to retrieve ducks for hunters. The breed developed from there.

As compared to its early ancestor,  the Chesapeake has a longer muzzle length, his stop isn’t as pronounced, the muzzle shape is pointed, but not sharp, and the skull rounds from ear to ear over the top, not from the stop to the occiput. The thin lips and length of muzzle are important as they enable the Chessie to retrieve and carry large game birds,  and toward the back of his mouth, the Chessie’s lower lips slope slightly downward, an aspect that allows water to run out of his mouths when retrieving a bird. A small and higher set ear keep the ear canal out of water.

While the overall size of the dog impacts exact measurements, as long as the proportions are maintained, the head is correct. Though our focus is on the head, in every way, the breed exemplifies form following function.

We end with a video from 1938, and be advised that it shows birds shot out of the sky: