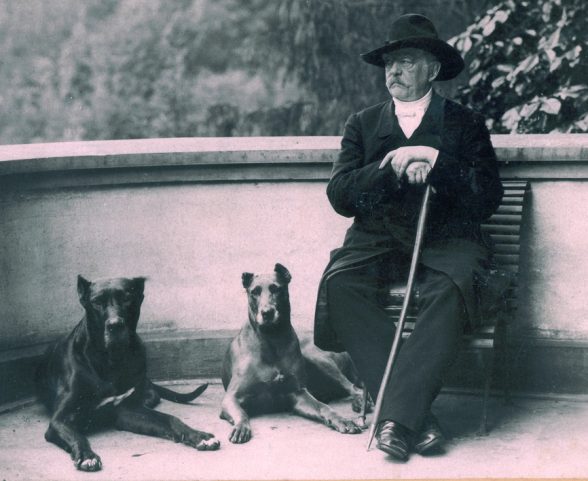 Almost for 60 years, Otto von Bismarck owned Great Danes, starting with the first dog he got when he lived with his parents in Kniephof. Perhaps none of them was as famous as “Tyras.”

The dog was well known in diplomatic circles for having nearly sparked an international incident.  On the occasion that Bismarck was having an animated conversation with the Russian Prime Minister Alexander Gortschakoff, the dog, lying on a nearby rug, only knew that the wild finger gestures aimed at his owner seemed highly aggressive. Tyras did what loyal dogs do. He jumped on the Russian and threw him onto the ground to protect his master.

Or did he? More on that later. Gortschakoff was clearly shaken, but not bitten, and mercifully, there was no political fallout from the incident. Tryas however, earned a name for himself as Bismarck’s most famous (or infamous) Ulmer Dogge.

Ulmer Dogge? We digress for a paragraph or two.

“Ulmer Dogge” was one of several names by which today’s Great Dane was once known. Indeed, few other breeds have had a name that has caused so much confusion. Until the mid 1800s, the breed was known by old names as well as what it was called in local areas were breeders lived. These names included Fanghunde, German Boarhound, Grand Danois, Hatzrüden, the Danish Doggen (so named by breeders in northern Germany) and Deutsche Dogge (as it was called by breeders in Württemberg), Dogue Allemand, German Mastiff, Tigerdogge, Saupacker, Ulmer Dogge, and even the Bismarckdogge (though Bismarck, himself, renamed the breed “Reichhund” around 1878).

When the first German dog show took place in 1863, the Great Dane was there, but eight of the dogs were registered as Danish Doggen, seven of them as Ulmer Doggen, and they were judged separately. In 1876, a group of judges expressed their sentiments that this divide was untenable since it was clear that these dogs were all the same breed. They suggested that the dogs, regardless of color,  be united as the same breed to be known as “Deutsche Dogge.”  You can read more here about the Great Name Debate for the Great Dane here, because we return to Tyras.

Tyras’ “encounter” with the Russian chancellor at the Congress of Berlin was conveyed to be public in different ways: In some accounts, Gortschakoff lost his balance after raising his arm at Bismarck to make a point and tipped over, Tyras simply running over to investigate. The satirical German magazine, Kladderadatsch, however, splashed a front-page poem entitled, “An den Reichshund” (To the Dog of the Empire) on its publication describing the dog as having ripped Gortschakoff’s pants.  In the end, it hardly mattered. Either way, Tyras was now famous.

When Tyras died in 1889, he became the only dog of his era whose death announcement was cabled round the world. After Tyras’ passing, Emperor Wilhelm II gave Bismarck “Tyras II” – another Great Dane – for his birthday. This, too, made news.

As for that first Great Dane Bismarck had when he lived with his parents?  The same dog went with Bismarck to the University of Göttingen where, it is said, the dog made a name for itself by scaring the headmaster silly. It seems that when Bismarck threw an empty bottle out a window and was caught, he took his large dog along to the principal’s office as an intimidation tactic. Given that the poor man hid behind an easy chair until the dog was removed, it worked., but only so far. Bismarck was punished for the bottle incident, but he was also fined for having taken the dog to the principal’s office.

Image of Otto von Bismarck with Tyras II and another Dane named Rebecca in 1891 by Strumper & amp; Co., Hamburg via commons.wikimedia