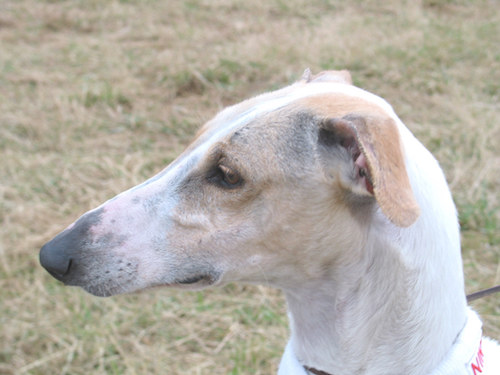 Some cynologists say that in Russia and the Central Asian Republics, the word, “borzoi” is a generic term for a sighthound, and there are regional types of borzoi in those places that should not be confused with the breed we in America know as the Borzoi. One of them is the Russian Greyhound, better known as the Chortai (sometimes spelled chortaj).

Developed from the Krymskaja and the Gorskaja, both now extinct, the first published descriptions of the Chortai date back to the middle of the 19th century.  The dogs were likely the result of breedings between the long-eared Asiatic sighthound and aboriginal spitz-like dogs which adapted and were developed over time to hunt in those regions between September and March/April.  Traditionally paired in braces, Chortais were used in conjunction with falcons, their combined efforts resulting in food on the table and family members clothed in furs.

Around 1950 during a special study of aboriginal sighthounds belonging to hunters in southern Russia, two specialists, Constantin Esmont and A.V. Lerche, prepared the standard which remained faithful to the main features of the Chortai by adhering to qualities necessary for their work:

The Chortai has a long flexible body, “flat bones,” a long neck in non-vertical position, fine angulation, a tucked up abdomen, but not exaggerated as one might find in a Greyhound or Saluki.

Because of flat bones and muscle dispersion, the Chortai looks lankier than a Greyhound, and compared with that breed, it’s much more flexible and supple, a structure that accommodates the dog not only at high speed, but the moment it captures its prey. It’s skin is much more resistant then that of a Greyhound as it must be protected from occasional wounds, and the Chortai has much more undercoat then its English counterparts.

Its head is very small when compared with its body, and its eyes have much more frontal position then in a Borzoi. Ears are rose-shaped, flexible, but larger than either a Borzoi or Greyhound.

In 2005, the first Hortayas were exported with full breeding papers to the Czech Republic, Slovakia, Germany, Finland and Switzerland. A year later, one was also exported to the United States. It’s believe that the first registered litter outside of the the Chortai’s historical habitat was born in Europe in 2006.

Today, the Russian Kynological Federation, a Russian FCI member association, officially maintains the breed standard. It’s believed that there are an estimated 2500-3500 dogs worldwide, but fewer than a few dozen outside of the boundaries of the CIS (Commonwealth of Independent States).