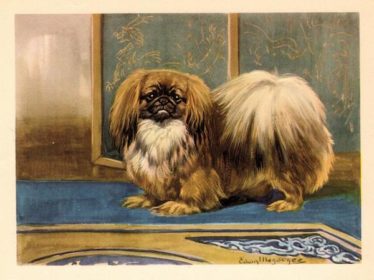 If you are a “dog nerd” (student of all things dog) and think that “Chrysanthemum” refers only to the Shih Tzu, you would be wrong! Not everything we write about here is a desired aspect of a breed, and a Pekingese tail that’s incorrectly formed so that it forms a “wheel” on one side is called a “Chrysanthemum tail.”  Ideally, a Peke’s tail is is slightly arched and carried well over the back, free of kinks or curls. Long, profuse, straight fringing may fall to either side, but the bones of the vertebrae that are bigger at the base and get smaller toward the tip are over the dog’s back, and not carried on one side or the other.  Mind you, this can be difficult to determine by “ringside quarterbacks,” and true evaluation must be determined by getting one’s hands on the dog, the only other way to also ascertain if the dog is solidly built, and surprisingly heavy for his appearance. In order words, the dog should look small, but “pick up heavy.”

Image: Pekingese by Edwin Megargee from 1942