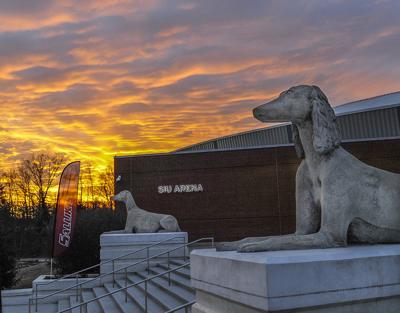 If you didn’t know why Southern Illinois University is known as “Little Egypt,” or why one of a pair of Amtrak passenger trains between Chicago and Carbondale, Illinois is named “the Saluki,” or why there are painted paw prints leading visitors down the street to the University in Carbondale, then you’d really be scratching your head as you enter Southern Illinois University’s football arena to see two massive concrete Salukis brace a flight of stairs, all the world looking like a pair of sphinx.

Even the most uninformed visitor quickly pieces together that the Saluki is the mascot for Southern Illinois University, a decision made more than 60 years ago when several members of SIU’s athletic staff (and probably the students, as well) thought that being the “Maroons” was, well, boring. Athletes and faculty members gave a thumbs-up response at the 1951 meeting to approve “Salukis” as the new name for the athletes.

Two years later the school got itself a real Saluki as a mascot named King Tut who became the star of Homecoming and sporting events. Sadly, Tut was hit by a car. He was buried at the corner of the university football stadium, and seven years later, the fraternity that had cared for him during his brief career marked his grave with, appropriately enough, a cement pyramid.

The old stadium was knocked down in 2010 to be replaced by a multi-million-dollar Arena and “Saluki Stadium.” In addition to a bronze, life-size Saluki standing vigilant on the concourse, that pair of cement Salukis designed and created by Robin Murez flank the entrance to the arena.

As of 2018, Jim and Vicki Blair have been the proud owners of SIU mascots, their current population of Salukis standing at ten, though Vicki’s family has had a total of 16 Salukis. In an article appearing in the Southern Illinoisan last year, mention is made of the popularity of the dogs with the fans, and how at one basketball game, fans were keen to have their pictures taken with “Pharoah” and “Meti,”  the two current mascots. Blair said, “We train them and socialize them as soon as they’re old enough and have had their shots. We socialize them with everyone we can, older people, the handicapped, with older people. Ours are used to being around a lot of people and it doesn’t bother them…” In addition to taking the dogs to see “their” team on a regular basis, Blair gives presentations on the breed throughout the region.

In 2018, the Blairs were awarded the SIU Alumni Association Achievement Award for Service presented only to those individuals who have demonstrated the highest commitment to support Southern Illinois University.

As for the original King Tut, he has not been forgotten. Though he has been gone for over 50 years, now, his pyramid is reverently power-washed, and was moved to a place of honor at the entrance to the new stadium where SIU faithful can touch it for luck.

One thought on “Touch the Saluki’s Pyramid For Luck”