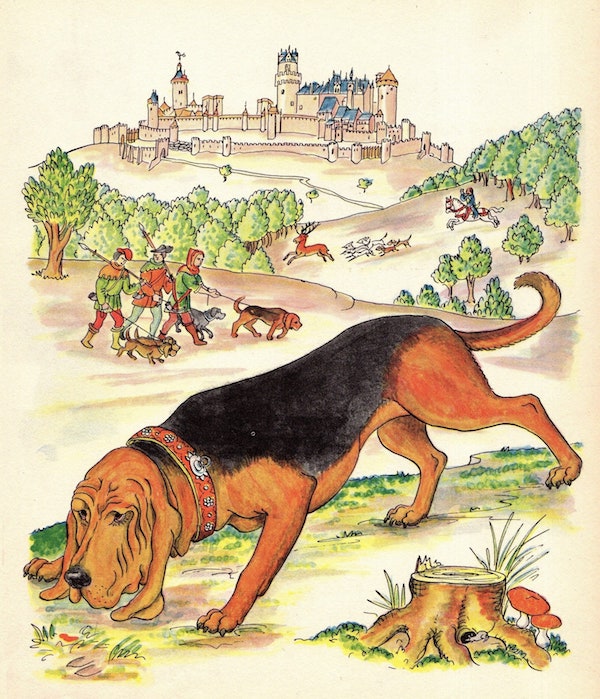 If you commit to memory every single thing you read on National Purebred Dog Day (if you do, we might have a job for you), you’ll recall that Hunting the Clean Boot is a British reference to the sport of using Bloodhounds to follow a natural human scent instead of an synthetic scent a runner drags behind them on the ground. It’s said that hunting with a pack of Bloodhounds in this fashion is one of the least artificial ways to hunt.

Hunting with Bloodhounds dates to Medieval times when hounds were used as “limers” or “lyam hounds.” These hounds were leashed and used to find prey before pack hounds were set upon it. But what were the origins of the “clean boot?”

It’s possible that it started in 1900 with a match between the hounds owned by one Mr. E. Brough of Yorkshire, and a certain Col. Joynson. The goal was to prove the usefulness of the breed in tracking men, specifically, criminals.  The match was held in the Vale of Ayles­bury, and according to one account, the dogs took so long to cover a short distance that it weakened the argument in favor using hounds to track bad guys. Mr. E. Brough’s hounds,”Clotho” and “Kickshaw” won the day, and in their defense, conditions were not ideal to pick up scent, and though the intended end result wasn’t proved, a new idea was born. Farmers who couldn’t afford fox hunting saw the potential in using hounds to chase a bloke. Following the match, it was suggested that regular meets be scheduled, and it was likely in this way that “man-hunting,” or the “clean boot” took hold.

In 1908, there came about a resurgence of interest in “clean boot” matches that was helped along by the Association of Bloodhound Breeders promotion. Participating in the clean boot was open to anyone who could buy and keep a Bloodhound, and owners were delighted to see whether their youngster would come up on the runner, stand back and bay at them, or run at them with the expectation of a cuddle and pet.

We pick up the thread of clean boot hunts with Bloodhounds years later in 1976 when the Coakham Bloodhounds Hunt was established by the late Neil Wates. Unlike previous hunt clubs, the Coakham hunt used Bloodhounds crossed with fellhounds to increase speed and improve jumping while keeping the breed’s scenting powers and melodious voice. Wates felt that pureblood Bloodhounds were notorious individualists difficult to pack, and too slow in open country.

The video below of the Coakham Bloodhounds is from 2009, and the one below that is from December, 2021:

There are other clean the boot packs in the UK, including the Farmers Bloodhounds established in 1989 by Michael Lucas. Also last month, Brian May, lead guitarist of the rock band Queen, attended a Three Counties Bloodhound clean the boot event in Swansea, Wales to promote cruelty-free recreational hunting.

Image: Bloodhound print by Anne Marie Jauss from a c1950s book is offered here by Ginny at plaindealing