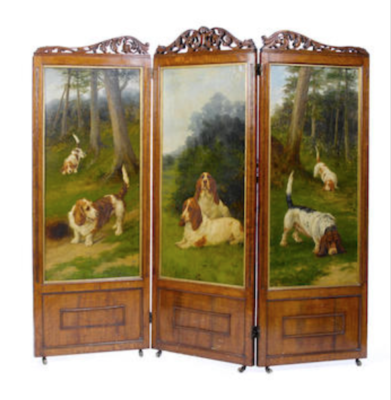 To our knowledge, there are roughly ten to twelve Basset Hound packs in the UK, but there was a time when there were several stains of Basset Hound, as well: The Couteulx, the Lane, and the Griffon.

Le Couteulx kennels in Normandy belonged to the Le Couteulx family, international traders and financiers, and it was Count le Couteulx de Canteleu who cemented a working type of the breed. By the time the Basset Hound was seen at the first exhibition of dogs in Paris in 1863, the dogs bred by Count Le Couteulx made him one of the two most popular Basset breeders at the time.

The Couteulx hounds (also known as Fino de Paris hounds) were described as typically having square heads, short, high-set ears, a softer, more sunken eye with a prominent jaw, a relatively slighter build, and a down-faced look that created more facial expression.  Their legs were straight and short, and they were, by some accounts, of sounder constitution than the other strains leading them to be a more agile hound. The more glamorous tricolors of the Le Couteulx hounds made them preferred, and indeed, a dog named “Fino de Paris” believed by some to be the pillar of the breed in British Basset Hound history, was bred by Comte de Couteulx, one reason that his line was also referred to as the “Fino de Paris” strain.

The other popular Basset breeder at the time of the Paris show was Mons.Louis Lane, of Franqueville, Baos, Seine-Inferieure; the dogs he developed (also known as the Lane Bassets or the Basset Normand) were very heavy, with plenty of bone and front legs that were fully crooked (“jambes torses”). The Lane hounds may have been in greater demand in France because there was those who believed that the dogs were of “purer blood” than the Le Couteulx strain (in which, some suspected, there was some Beagle blood. In truth, the Count had two lines going, each of a distinct types. One was heavily built and usually tricolor or red and white, the other was the one said to be crossed with the Beagle). In spite of their purer quality, the Lane dogs didn’t gain acceptance in England, possibly because some viewed their heavy conformation as an impediment to hunting. Although a few Lane hounds were exported, they were, ironically, cross-bred with the more popular Le Couteulx type of hound.

Wire-haired Bassets known as Basset Griffons were introduced into England at a later date than the smooth coated dogs, and for some reason, these dogs never caught on. They were said to resemble short legged lemon and white, gray, or sandy colored Otterhounds, and they had a very different way of hunting. In France, the two coats weren’t even regarded as the same breed, though some breeders crossed the two coats with lackluster results.  One source we came across wrote of some rough Bassets from the Sandringham kennels (the Royal Kennels in England) having been exhibited, but over time, English breeders decided that they wanted to create a larger, heavier boned dog, and the rough coated dogs were no longer allowed to bred with the smooth coated animals. It was a death knell for the Basset Griffon.

A comprehensive look at the breed history was published by the Basset Hound Club of America and should be required reading for anyone interested in the breed. You can find it here.

Our image is called, “Rough and Smooth Basset Hounds,” three panels mounted within a three-fold oak screen all signed by Maud Earl. The screen sold at a Bonhams auction for $22,000 in 2009.