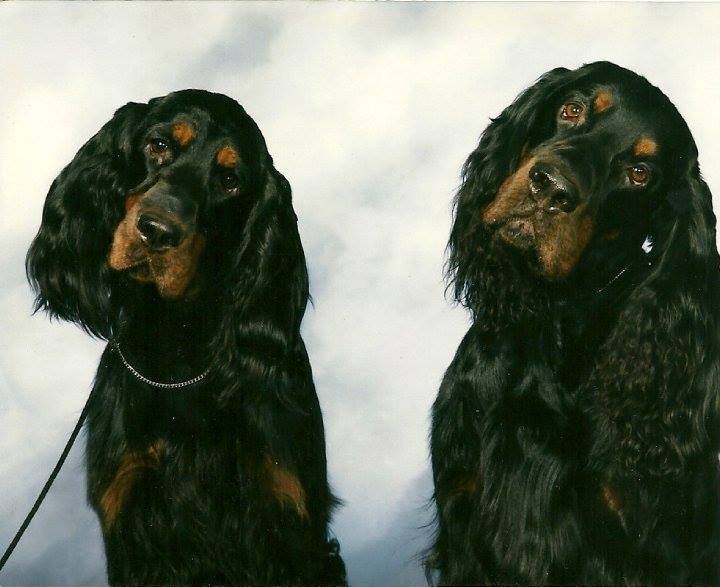 Gordon Setters are one of the few breeds in the world named for an actual person.

Mentions of the “black and tan setting dogges” go as far back as the 1600’s, but it was a duke in Scotland in the early 1800’s who gave the breed the name we know it by today. Alexander, fourth Duke of Gordon, maintained a kennel and a breeding program at his estate, and his “castle setters,” as they were sometimes called, were prized not only for their hunting ability on the rugged moors of Scotland, but also for their herding skills on local farms.

After the fourth Duke’s death, other dukes who’d been bequeated the kennels did more harm than good, but when the 6th Duke of Richmond-Gordon inherited, he restored the lines. By then, the dogs were also known as Black and Tan Setters, a name that stuck for some time, but when the English Kennel Club registered them in 1924, the name was changed to the Gordon Setter.

In this country, the first Gordon Setters were owned by statesman, Daniel Webster of New Hampshire. He and his friend, George Blunt from Morristown, New Jersey purchased “Rake” and “Rachael” from the Duke of Gordon kennels in 1842.  Blunt kept Rake, the big black, white, and tan male, while Webster took Rachel, a solid black-and-tan female. Both dogs had the reputation of being fine hunters, but Blunt and Webster kept a running tally (read: a friendly rivalry) over whose dog was better. Rake and Rachel were the foundation dogs for the breed in this country, and as late as the early 20th century, most Gordon Setters could still be traced back to Gordon Castle Kennels.

Photo: “Callie” and “Duffy” circa 1999 by the late Jay Kitchener