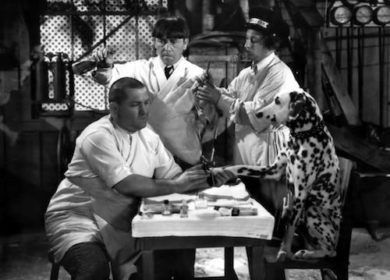 Some say the style of humor that the Three Stooges employed belongs to a different era. We’re more sophisticated now, and it takes more to make us laugh than slapstick.

Does it? Find out by watching the short clip below:

Perhaps it’s true that not everyone finds this funny in the year 2020, but history looks kindly on the Three Stooges who were the most popular short subject performers in the history of film.  Notoriously bad haircuts were part of their shtick, but their ability to poke fun at current social topics, especially during World War II, with their creative but zany comedy was a welcome distraction to weary audiences.

Their humor specialized in over-exaggerated and physical antics that one normally associates with quarrelsome siblings.  In fact, while there were actually seven Stooges in all, the best known of them were, indeed, brothers: Moses, Jerome and Samuel, better known as Moe, Curly and Shemp. It was the addition of Larry Fine that became the classic Stooge line-up we know as Curly, Larry, and Moe.

Reams and reams have been written about the Three Stooges, but our post today focuses on Jerome Lester Horwitz, or Curly, the “baby” of the Horwitz brothers. His “woo-woo”s and “n’yuk nyuk”s, aside, Curly, in “real” life, was an avid dog lover. In a Facebook post by Miranda Squires Magnus, she writes;

“Curly’s contract with Columbia Pictures included a clause that allowed him to bring his dogs on set. The studio limited him to no more than two dogs at any given time. This was due to Curly’s pups making random unplanned walk-on appearances during production. Especially during some of the more raucous scenes. You can still catch those surprise canine cameos in some of the earliest Three Stooges shorts.

“Typically having several dogs at any given time, Curly was known to come home often with strays he found along his travels. He would foster the strays until he was able to find new homes. And when the Stooges were on tour, Curly made it a point to rehome, at least, 1 stray in each town they visited. It is estimated that Curly saved and re-homed more than 5000 dogs in his lifetime – making him a man before his time with his humane concern for man’s best friend.” 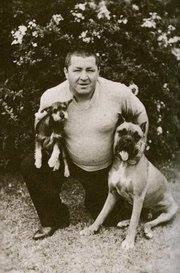 Curly did have his own dogs, a couple of Collies (one of whom was named, “Lady”), Cocker Spaniels, Miniature Schnauzers, and a Boxer (though curiously, his brother, Shemp, had an assortment of phobias that included a fear of every dog but his own Collie, “Wags”).

In the book, “Curly: An Illustrated biography of the Superstooge,” by Joan Howard Maurer (Moe Howard’s daughter), she writes that of the dogs, “Some…’barked their brains out,’ some ‘bit and snapped,’ but all of them were “one man” dogs, and loved only Curly. To Curly, a canine companion made minimal demands, was always affectionate, cost very little money to care for, and was forever loyal.”

For all his altruism towards dogs, Curly deserved better than what he got towards the end of his life. By 1945, he was suffering from high blood pressure, hypertension, a retinal hemorrhage, and obesity. He’d had a series of strokes, and on January 18, 1952, “Curly” passed away at just 48 years of age.

Image:  Scene from the Three Stooges (Moe Howard, Larry Fine and Curly Howard) “Mutts to You” (1938).

14 thoughts on “The Dog Loving Stooge”