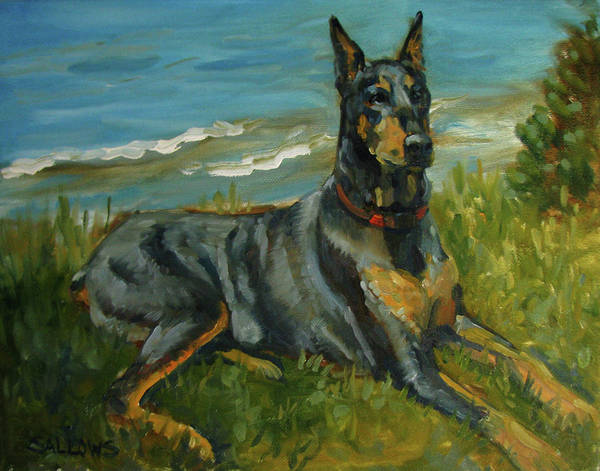 The foundation of the Doberman Pinscher were two dogs: A stud muffin named, “Schnupp” (described as a black male with red markings who was clever and fearless) and a lass named, “Bisart.”
Though we want to talk about Bisart, we mention briefly that Schnupp and Bisart’s puppies were black pups with rust colored markings. From that point on, accounts vary as to what other breeds went into the dog that Friedrich Louis Doberman created. By most accounts, the German Pinscher, Beauceron, German Shepherd Dog, Manchester Terrier, German Short-Haired Pointer, Greyhound, Great Dane, Weimaraner, and Black and Tan Terrier all went into the mix.

As for Bisart, she was originally named “Bismarck,” but Dobermann was warned that it was unlawful to give a female dog the name of a great statesman, so he changed her name to “Bisart.”

It was said that Bisart was a very keen young lady, and it paid to be careful with her. When she was in season and went with Herr Dobermann on his rounds, no other protection was needed other that to allow Schnupp to go along. Think “social” distancing?”  If local boys approached the saucy young lady, Herr Dobermann only needed to say to Schnupp, “Lets get rid of the other dogs,” and Schnupps would immediately chase them off.

Dobermann’s son would go on to say that his father bred some very good puppies from Bisart, youngsters that were almost all black with red marking (though the occasional black with red and white markings would come through).  These dogs were never used for breeding, but neither were they were not culled because they great working dogs.

“Pinko,” one of Bisart’s daughters, had a natural bobtail, but Dobermann kept her in his breeding program. Thinking he would get pups with short tails, he bred Pinko with a bobtailed stud and this eliminate the need to dock tails. Results; Only one bobtailed puppy appeared in the litter, but Pinko did consistently produce Black and tan, and Blue and tan puppies. She also whelped many other bitches who went onto produce the foundation stock of the Dobermann Breed.

Dogs may be the “peacocks” in a show ring, but just try to create or continue a breed without a great bitch.