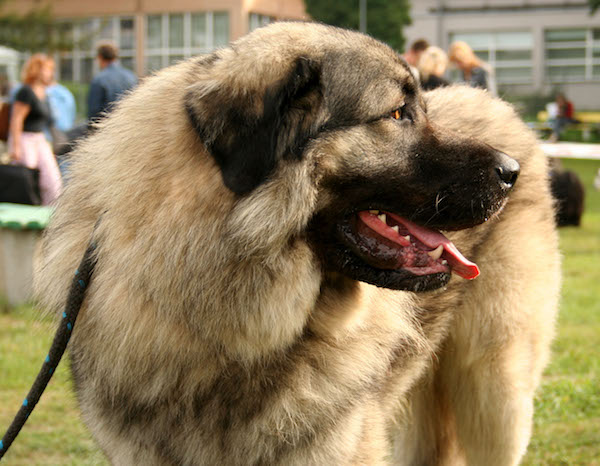 Ed. Note: The best thing about dog people, we think, is how interesting they are. Virtually everyone has a story to tell, whether it’s an amusing anecdote about being a new dog owner,  experiences with a new breed, or a fascinating account that reaches into rare breed history. An e-mail we got the other day certainly qualifies as the latter, and we have permission of the author, Marjorie E. Tann-Rucker, to share it, and her photos, with you.

“In the late 1970s, a man named Vasa Cubalevic, brought a large, white, long haired female dog to a dog training facility in Long Beach. Mr. Cubalevic claimed to have imported his bitch from a government cooperative off the mountain Bistra in the Sar Planinac Mountain range in Macedonia, Yugoslavia. The bitch had been “carried down the mountain on a donkey” according to Mr. Cubalevic, who then brought her to his home in Glendale. Mr. Cubalevic claimed he had papers for her, and that she was a purebred Sarplaninac.

“No one had heard of the breed in the 70s, and no one believed him at the training facility. He was a rather grandiose individual, eccentric, very rich and spoke with an extremely thick accent….. I was assigned the bitch, heretofore to be referred to as “Bistra,” for obedience training.

“One night, several dogs, including a German Shepherd named Lasta, belonging to Mr. Cubalevic, broke out of the kennel. Lasta was struck and killed by a car. Mr. Cubalevic removed Bistra from that facility and contacted me surreptitiously saying he would pay me four times my salary to come to his home and train dogs, and then work for him at his company, Continental Culture. I took him up on his offer…..and what an adventure it became.

“I arrived at Mr. Cubalevic’s estate in Glendale the next day to start training Bistra. The tales about him being quite wealthy proved true. I was buzzed in at the gate and stepped into his opulent mansion. The arrangement with him was that I would train Bistra out at Griffith Park daily.

“Bistra was not particularly interested in obedience training. She sulked, pouted, dragged behind me, and was generally as passively noncompliant as possible. I was use to Dobermans and German Shepherds. She was a pill to deal with. I did not really understand why until later.

“When I was done with Bistra’s daily training sessions I worked at Mr. Cubalevic’s company in the office doing general clerical work. One day while filing I came across a file on Bistra. It was then I discovered her import papers and FCI registration papers. Turned out the tale was true…..all the way down to the arrangements to get her down the mountain on the donkey “train.” I began researching the breed in earnest.

“It turned out Bistra inherited her independent streak through generations of careful breeding at this government sheep cooperative. They used native Sarplaninac as livestock guardian dogs, THE livestock guardian breed of Macedonia. The Sarplaninac was valued for its independent nature, strong guardian qualities, and ability to work alone on a mountain for long periods of time guarding sheep. There appeared to be a working dog strain of the breed, Bista’s type, that came in all colors including parti-colored, solid white and dark solid colors. There also was a distinct military strain of the breed, that rejected any white on the dog and was used in “Tito’s” army.

“After two to three years I moved on to other employment, but kept up my friendship with Mr. Cubalevic. One night I got a very distressed call from him. Bistra had been in a fight with one of his other dogs and reportedly her eye was “hanging out of the socket.” Thus began a long transition of changed ownership.

“Mr. Cubalevic did not possess the character qualities to be a pack leader for his dogs….and Bistra, it turned out, had been covered by one of Mr. Cubalevic’s German Shepherds and had recently weaned a litter of EIGHT mixed breed pups. She was injured from fighting and worn out raising a litter at too young an age. I suggested we find a responsible breeder of a similar breed to place her with for care and recuperation. I was renting at the time and could not take her in.

“So Mr. Cubalevic, his girlfriend and her son, Bistra and I, embarked on a trip to Northern California to meet JoAnne Teems, a Great Pyrenees breeder. JoAnne kept Bistra for about six months. JoAnn did further research on the breed, discovering Bistra was the first of her breed to enter the U.S. An article featuring Bistra, by Ms. Teems, was printed in a Great Pyrenees publication.

“Ms. Teems contacted Mr. Cubalevic after six months stating she thought Bistra was well recovered from her trials and ready to return, however Mr. Cubalevic decided it was too dangerous for her to return to his place. During this time I had purchased a home. I received a call from Mr. Cubalevic offering Bistra to me.

“Bistra turned out to be a joy to own. At the time I was living in Long Beach, California, not exactly the optimum environment for a livestock guard dog, but then she hadn’t been around sheep anyway since she had been weaned off a ewe in Macedonia. 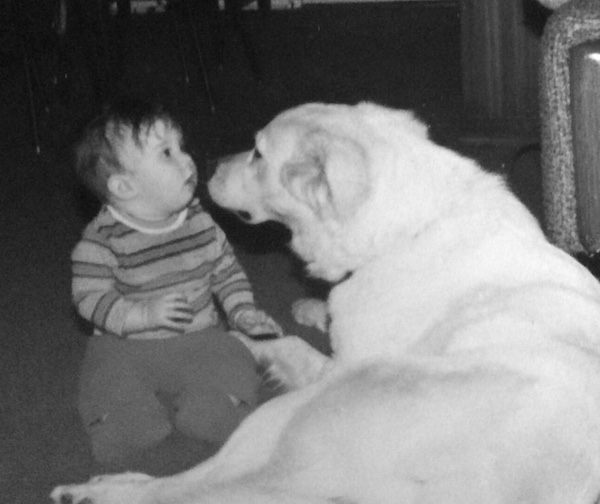 “Bistra” with the author’s daughter, Leanna

“I continued researching more and more into the history of the breed, and into the birth of livestock guardian dog use in the U.S. It’s simply been too many years for me to remember all the details, but at some point I learned of Professor Raymond Coppinger’s work in the Livestock Guardian Dog Project at Amherst College in Massachusetts. (Professor Coppinger by the way continues to do canine studies and has recently done a lot of work on the history of domestication in canines). Professor Coppinger was testing several Old World livestock guardian breeds including the Maremma, Anatolian Shepherd, Kuvasc, and to my surprise, the Sarplaninac. It turns out he had just recently imported an entire litter of Sarplaninac. I contacted the professor and advised him I had an unrelated bitch. After a great deal of wheeling and dealing we agreed he would send me a male pup, who would then breed with Bistra upon reaching maturity. I would then ship back two pups to him from the subsequent litter.

“All went well, and the puppies from that first litter made it back to the university. The rest of the pups were sold in Southern California, with the exception of two that were sold to a sheep rancher in Penngrove, California. That rancher managed to get one of the military line of Sarplaninac and bred that dog with Bistra and Shasta’s offspring. She founded her own kennel and moved somewhere in the Midwest. I lost contact with her also, and assume she is now deceased. I bred Bistra one more time, and the balance of those pups went to working ranches. 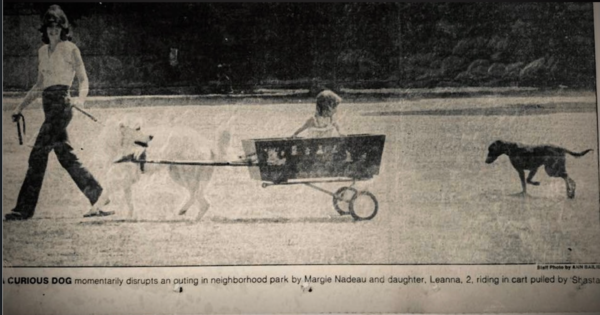 Newspaper clipping of the author, her daughter, Leanna, and Shasta

“In the meantime a short lived breed club started up in Southern California. More Sarplaninac from the military line were now being imported by immigrants to the U.S. from different areas (states) within Yugoslvia. At that time I was not aware of any more livestock guard dog lines entering the U.S. besides Professor Coppinger’s dogs and Bistra. The breed club became a battle ground of ethnic “war” centered over the lesser regarded (at least by the Serbian members of the group) farm working dogs and the more highly regarded (except by the immigrants from Macedonia) military line. In time that club disbanded as far as I know.

“Finally, this tale comes to a rather sad end. I divorced, and found myself with a daughter to support, two huge livestock guardian dogs, and limited options on a rental home that would take all of us. I managed to keep the dogs with me for two years more, but finally it got to the point where I was forced into rehoming my two wonderful Sarplaninac, Bistra and Shasta. I found a Pyrenean sheep rancher living in the Bodega Bay area. I went there with my now husband of 30 plus years, along with my daughter and my two beloved dogs, Bistra and Shasta. The shepherd promised Bistra would only be bred one more time (I was young and ignorant then, who knows how many times he could have bred her, and I assume I will never know) and that both dogs, and their get, would be used to guard his flock.

“I visited the ranch several times afterward, but eventually our paths diverged and we lost contact with each other. The last time I saw Bistra and Shasta they were literally atop a bluff overlooking the ocean guarding a herd of sheep.

“I could not have asked for a more fitting end for the two of them.

“As for Mr. Cubalevic, I also lost contact with him over time. I called a stepson residing in Glendale, California, and was told he had died.”

Our thanks for Majorie for sharing her remarkable story.

4 thoughts on “The Dog Delivered by Donkey”