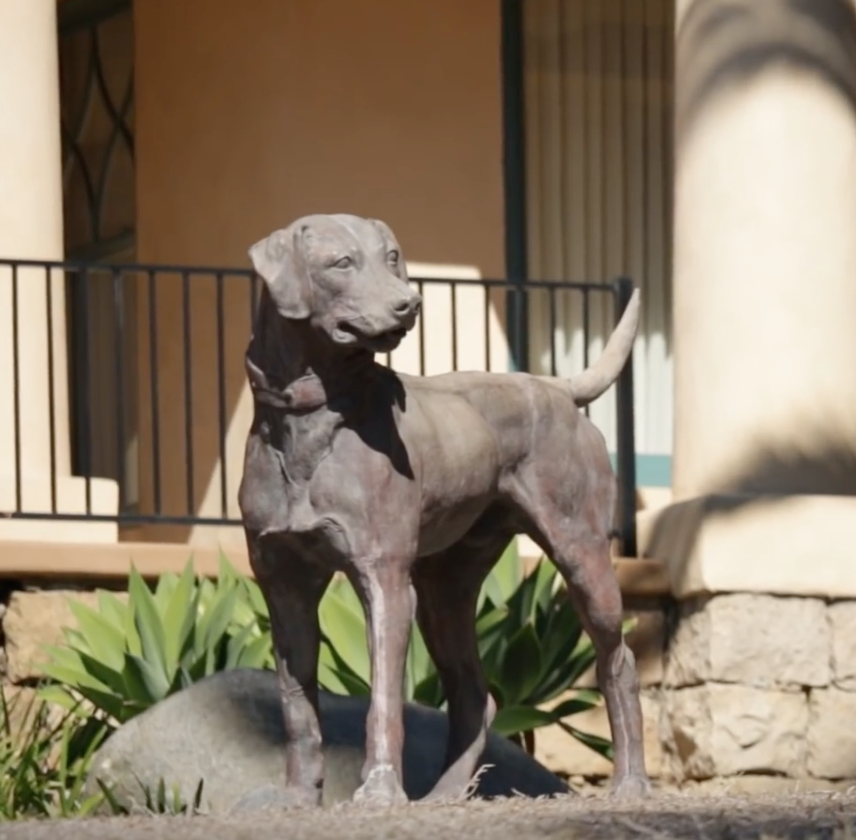 Do you live in an area that has a statue that gets dressed up in appropriate holiday attire?

You do if you live near the corner of Mission and Garden in Santa Barbara, California.  “Rover,” a 4-foot tall, 340-pound bronze Labrador Retriever, has been standing guard over Santa Barbara’s Upper Eastside neighborhood for nearly 115 years, a house that heads a line of five historic houses known as Crocker Row. The dog statue been seen pulling wearing reindeer antlers or during December, though last December, he had an N-95 mask over his face when ash and smoke fell over the area during the Thomas Fire.

The house built in 1894 by William H. Crocker didn’t have “Rover” in the beginning. The statue came in 1904 with the second owners of the home who transplanted from Michigan. As the story goes, they had the statue made in the memory of a beloved pet, a Labrador Retriever born the same day as their daughter, Eleanor, in 1884. The real-life Rover grew up with Eleanor, and reportedly lived to be 18 years old.

It won’t be a surprise to learn that over the years, the statue has been subject to pranks. Once, the statue was stolen by a group of high schoolers, one of whom went on to become a Superior Court judge.

As of February, 2018, the historic house – known as the Dog Statue House – went on the market and was listed for more than $4 million – but the sale came with a caveat: The next owners had to agree to continue the tradition of dressing up the dog.  No word on if the house sold….

See more of the Dog Statue below: