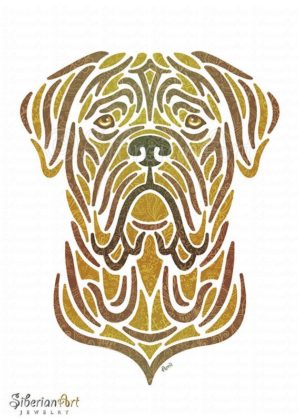 The Bordeaux–Toulouse is a 200 kilometer long high-speed rail in France, but the word, “Parisian” in the post title makes it a reference to the three types of Dogue de Bordeaux that existed in France in the mid to late 19th century: the Parisane (a heavier, more wrinkled dog), the Toulouse (smaller, broader, and with a much heavier head and more color variations), and the Bordeaux, closest to what we know as the Dogue De Bordeaux today. These classifications were based on the region of France from which the dog came, and the dog’s primary job (guard dog, hunting dog or a fighter).  Some historical accounts, however, refer to only two varieties, Dogues and Doguins, the former, being a considerably larger dog than the latter, and the Doguin having vanished into history altogether.

The first French dog show took place in 1863, and while Dogues de Bordeaux were entered, but it wasn’t until 1896 that the first breed standard was published by Pierre Meguin, a French veterinarian, in a joint effort with a Mr. Brooke, Dr. Wiart, and a group of French breed authorities. The standard appeared in Meguin’s magazine, “‘E’eveur” (the Breeder) and was based on the best best breed traits of exhibited dogs the men had seen in the preceding 20 years. A year later, the standard appeared in Henry de Bylants, “The Breeds of Dogs,” a year later.

As an aside, the man who wrote the second standard in 1910, Professor J. Kunstler, never considered the Toulouse type to be a Dogue at all, but rather a Bouledogue (Bulldog).  He published his standard under the title, “Etude Critique du Dogue de Bordeaux,” a document regarded as such a thorough study of the breed that it served as a basis for the third and fourth version of the Dogue de Bordeaux standard.

That third version was written by a breed expert, Dr. Raymond Triquet, and a veterinarian, Dr. Maurice Luquet, in 1971, and the fourth standard created in 1993 was simply an updated version that was reworded by Dr. Triquet and Philippe Serouil, President of the French Dogue de Bordeaux Club, and only so that the standard would be accepted by the F.C.I.