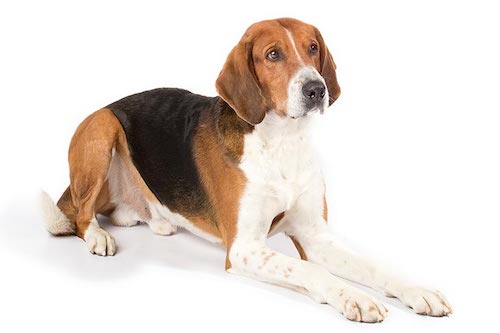 We have long regarded our breeds as “museum pieces with a pulse,” so when we read Dr. William Lewis Judy’s description of the American Foxhound as being a “piece of good architecture,” it resonated with us.

We got to wondering, however, what exactly makes architecture “good.” It turns out that Marcus Vitruvius Pollio, better known as Vitruvius, answered the question in the first century B.C. In his view, good architecture has firmitas, utilitas, and venustas, or in English, durability, functionality, and beauty. The “thing” has to be well built, it has to suit the user’s need, and it should be beautiful. Son of a gun, but Vitruvius could have been describing an American Foxhound.

This is an athletically built breed with proportioned, well balanced body structure that is lighter and racier than its English cousin because it hunts over a different sort of country. Its shoulders are “sloping” instead of upright so that the dog can move efficiently in unison with the pasterns to minimize jolt or jarring to the joints and increase endurance, and the pasterns are “strong, flexible and very slightly sloping” (from the breed standard) so they have the elasticity to act as shock absorbers when feet hit the ground. When standing, the dog should have his weight distributed evenly on all of his toes and the heel of his foot.

The Foxhound’s hugely important running gear (which account for 35 points out of a 100 point scale) include straight forelegs that should swing freely like a pendulum, something the dog can’t do if its elbows are turned in or out. If the elbows turn out, the hound moves with an inefficient paddling motion, but it the elbows are “tied in,” movement is restricted and the length of stride and speed is decreased. The forelegs are well boned because they have to carry a 50 to 60 pound dog over many miles at a good pace.  Old hound books called for length to give the foreleg plenty of room for extension in a long, ground-covering stride sometimes called “true arm” or “elbow slash.”

As this is a scenthound, endurance trumps speed, and so the Foxhound’s chest should be deep for lung and heart capacity. Well-sprung ribs that “should extend well back-a three-inch flank” allow for springiness that will make distance running endurable.  That said, overdone, or barrel-shaped ribs will interfere with the free pendulum swing of the front legs.

Its feet are “fox-like,” with “full and hard” pads, sometimes described as having a “strong horn.” Open or splayed feet will result in the hound “calling it a day” long before his pack mates, and there is little room in a pack for a dog that can’t keep up because his or her feet hurt.

The American Foxhound’s neck is of a good length, important because a proper neck length allows the hound’s nose to reach the ground easily, even at a gallop, in order to pick up a scent.  The neck tapers into the back, and the back line is practically level from the shoulders to the loin because anything else, i.e., a roach back, will rob the hound of flexibility and agility.

A white tipped tail carried up (but never over the back) is easily visible swinging on a trail, and it’s attached to a body with a short coat that’s easily maintained. At the other end of the tail is a face exhibiting a pleasing expression, gentle and pleading, according to the standard.

In an article on good architecture, columnist Aaron Betsky wrote: “If a new building is absolutely necessary, it should be good… It should use minimal amounts of energy both in construction and in use…. It should enhance its site. It should be beautiful.”

Substitute the word “it” with American Foxhound, and we rest our case.