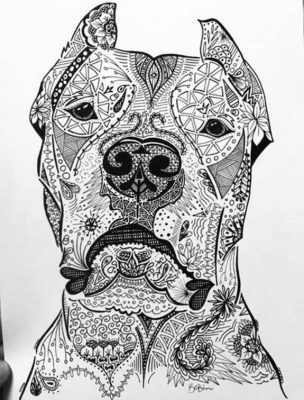 All dogs need a cheek muscle called the masseter to open and shut their jaws to eat, bite, and hold prey. Soft mouthed breeds like certain retrievers, toy breeds, and dogs that kill prey by snapping don’t need well developed masseter muscles for obvious reasons, but the fact is that only one AKC recognized breed has a standard in which the masseter muscle is mentioned at all.

That it’s not the Bulldog may surprise some readers because of breeds that grab and hang on, like the Bulldog. Such a breed has well developed masseters, and one would expect this to appear somewhere in its breed description. Sometimes the word, cheeky, is used instead to describe the same thing, but the only context in we found “cheeky” used in any of the AKC breeds was as something objectionable.

When it comes to the Bulldog standard, the cheeks are described as needing to be “well rounded, protruding sideways and outward beyond the eyes,” and the power the breed needed to do its historical job as a bull baiter comes in the section on the jaws: “The jaws should be massive, very broad, square and “undershot,” the lower jaw projecting considerably in front of the upper jaw and turning up.”

So what breed does mention the masseter muscles? It’s the Dogo Argentino: ” The cheeks and masseter muscles are large, well defined, and covered with tight skin.” It stands to reason as the breed is known for extraordinary strength needed to hold wild boars and puma.