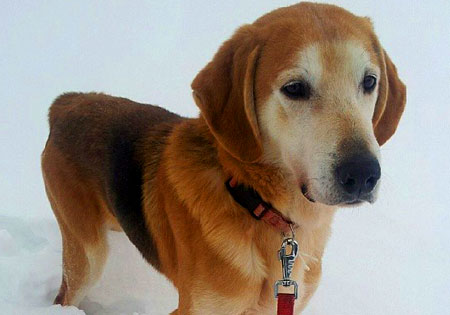 If ever there was an unfortunate name for a dog breed, it might be this one: The Drab Yellow Hound. Mercifully, the breed has other names including Kostroma Hound and the Gonchaya, but most of would refer to the breed by the way it more commonly appears in publications: The Russian Hound.

Though most of us may be unfamiliar with the breed, it has a long history in Russia dating back to the Middle Ages and indeed, today it’s one of the most populous breeds in its native country with several thousands registered with the Russian Kennel Club.

Phenotypical changes over time happens to many breeds, and so, too, the Russian Hound was “tweeked” with the long-ago introduction of European hounds, perhaps even crossed with laikas, but by and large, the breed still retains many of its early qualities, and to the relief of many, their distinctive voices – from a having baritone tongue to a treble one, is one of them. Russian dog researcher, Dmitri Dimov, once said, “The hound’s voice is the symbol of the hunt, “singing to the glory of the joyous hunt in the autumn Russian forest. In these moments, a true hunter forgets about his gun. Tears come to his eyes, and emotions take his soul. . . . For such moments, do the true fanciers keep their hounds.” Hunters say they recognize specific dogs even from a distance.

A breed standard was established in 1925 at the first Soviet Cynological Congress which based the standard on the dogs they saw from the Kostroma region.

Traditionally, these dogs were used in conjunction with Borzoi which would chase the prey after the Russian Hounds located and dispersed it into the field. To their credit,  this is a versatile hunting dog with good coat and strong paws fit for hard winter conditions. Hunting in snow isn’t for sissy dogs, and this video we came across (safe to watch for the tender hearted) nicely illustrates what a dog has to contend with:

With regards to what they hunt, these hounds are equally comfortable with a hare or a bear. Calm and easy, a typical Russian hound is peaceful at home, but when hunting, they are exuberant, fast, and pressure the game strongly

2 thoughts on “The Drab Yellow Hound”