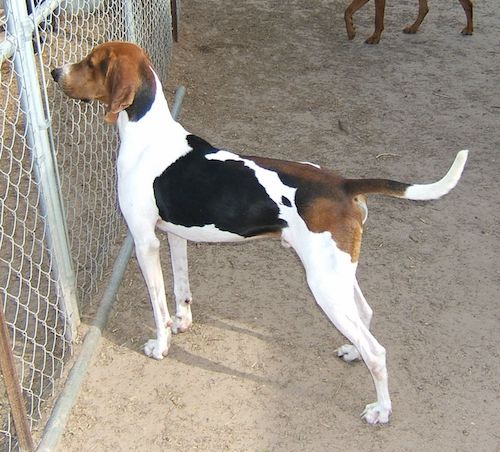 To anyone looking in from the outside, the coonhound world is fascinating.  It has its own lingo, its own tests – Nite Hunts – its own Coon Hunting Etiquette – and even its own gear (can you ever have too many good coon squaller calls?).  Adding diversity to the picture are the several lines that come with its enthusiastic proponents, and we’re looking at a rich tapestry of Coonhound diversity. What they all have in common (save the Plott which is a different story) are their canine ancestors who accompanied immigrants to the United States from Europe and settled largely in the American southeast.

In the “looks department,” or phenotypically speaking, there isn’t much difference beyond the Running Walker being a bit smaller and lighter.

In behavior, however, it’s a different dog entirely. Though both Treeing Walkers and Running Walkers descend from the same breeding stock over a century ago,  Treeing Walkers were selectively bred for their ability to run game up trees, typically raccoons, bobcats, bears, etc., while Running Walkers don’t have the treeing instinct that their cousin has (hence, the name difference. See how that works? – grin). Running Walkers, then, don’t check trees, and prefer to stay on trails that stay on the ground. They are fast, intelligent, and possess the tenacity to follow their prey for longer distances, though some hunters are of the opinion that Running Walkers have shorter attention spans than the Treeing Walkers making them a bit more challenging to train. Running Walkers are ideally suited to hunt non-arboreal animals.