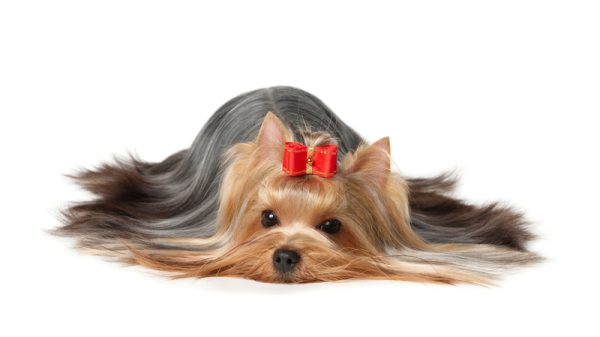 The “ear action” of a dog moving his or her ears around as if they’re picking up a satellite signal is something most of us find pretty cute, but anyone who has lived with a dog knows that different positions and movements mean something. Ears can signal anxiety, appeasement, confusion, and the all important “back off!”

Ears, however, are also important from a conformation standpoint. They are part of breed type, and type is hugely impacted by expression. A new exhibitor can unwittingly sabotage their dog’s success in a show ring by how they present their dog. We use the Yorkshire Terrier as an example, and specifically, its topknot and the connection to ears.

Topknots were originally designed to keep the dog’s long, silky hair off his or her face, and it’s such a part of the breed that it is address in the breed standard: “The fall on the head is long, tied with one bow in center of head or parted in the middle and tied with two bows. Hair on muzzle is very long. Hair should be trimmed short on tips of ears and may be trimmed on feet to give them a neat appearance.” This fringe hair should be trimmed off the edge of the ear leather about one-third down from the tip, long hair on the front and back smoothly trimmed one-third down from the tip. There is a reason we put into boldface the section on trimming hair on the ear tips, and that comes after we explain – simplistically – the method behind a Yorkie’s topknot. It’s far from simply gathering the hair together and securing it in a rubber band.

Typically, head coat is combed so that it falls naturally, but then a part is made from the outer corner of the eye to the inner corner of the ear on that side. Hair is combed upward, then backcombed between the ears, an elastic banding holding the coat in place near the head. At this point, many groomers use a knitting needle or the tip of a handled comb to pull the hair near the forehead forward forming a little pouf. A bow is attached, and once it is in place, both front and back sections of hair are gathered together, a final band connecting them, the connection slightly above the bow.  It takes practice to make a centered, symmetrical top knot that isn’t crooked, and our tortured explanation doesn’t do justice to the skill it takes to master it.

Mind you, at-home Yorkies, which is to say dogs that aren’t show dogs, are often kept in a short coat, or their owners simply use a snap clip to secure their hair off their face… 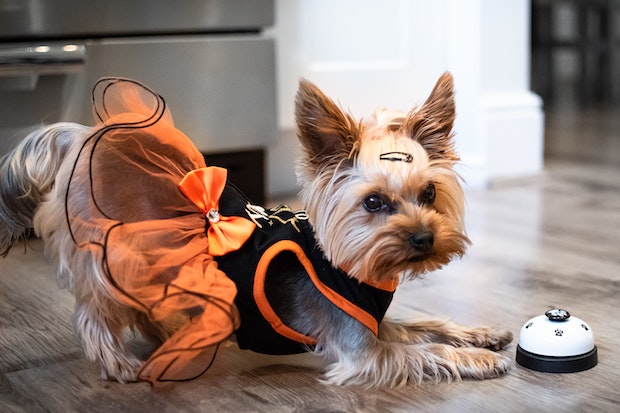 Photo by Matt Walsh on Unsplash

But a show dog is different.

Why we highlighted the importance of trimming hair on the ear tips is that it’s all too easy to get ear fringes caught up in a Yorkie’s topknot, and when that happens, the dog can’t freely move his or her ears. Ear movement is very important to expression which, in turn, is critical to breed type. Furthermore, when a topknot is too tight, it’s more like a “Ninja Knot,” and the dog’s tight scalp feels it!  Yorkies have sparkling eyes with a sharp, intelligent expression, but it’s hard to feel bright when your “hair is on too tight.”

In a coated show dog,  hair matters. It’s the shiny calling card for a sound, typey dog, and in certain breeds, fanciers learn quickly that getting it wrong results in thinning coat or worse, hair loss.  If that happens, one’s show dog develops a coat that is, as the old expression goes, “finer than frog hair.”