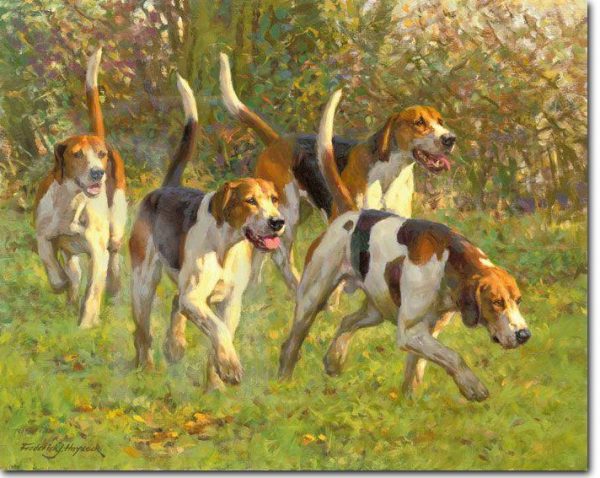 The Duke of Beaufort was annoyed. His hound had taken down a stag too quickly, and on the way back to Badminton Kennels, the dog found a fox on Silk Road and had a marvelous romp across open land. The dog would be chasing that fox still if it weren’t for the mortality that faces us all. Nevertheless, this ancestor of the English Foxhound was on to something when it gave the fox a chase.

Since 1743, the English Foxhound has hunted in packs. These dogs will follow their nose over, under, through, and around any obstacle, and they’ll do it in the company of horses and some twenty or thirty other dogs without a snarl or hint of uppityness. That’s what the dogs were bred to do, and that’s how they were bred to behave.

Packs of Foxhounds are still kept in England, and every year, all British hunts register their puppies. Outside the MFHA Stud Book of 1841, there are certain hunts which keep their own pedigree records, some going back more than 300 years. Brocklesby, for example, has kept its Stud Book since 1746. Also, the Badminton Kennel (yes, that same kennel from the first paragraph) has Stud Books dating back to 1728.

We’ve never understood why the English Foxhound appears at the bottom of AKC registration numbers, though it’s possible that not enough people have been exposed to this breed.  They would surely admire the breed’s regal presence in a crowd,  and melt under the gaze of those dark, intelligent eyes.

One thought on “The Duke of Beaufort’s Hound”