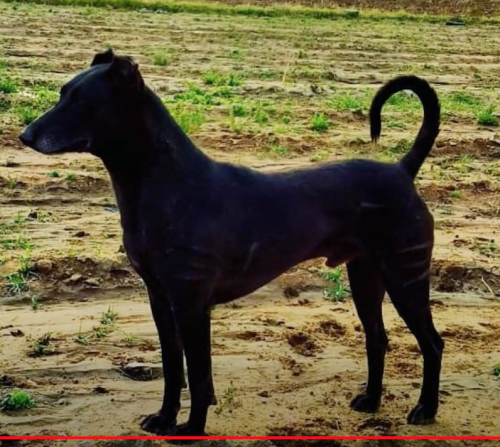 If you are baffled by the following sentence –  “Sweet as a Rasgula, Spicy as a Hyderabadi Biryani” – you at least have the advantage of knowing that it refers to a dog breed. We came across the clause without benefit of a photo or even context, and it wasn’t until we did a more thorough online search for the phrase that we found the “rest of the story,” or in this case, the rest of the sentence. It was: “As sweet as a rasgula when it comes to their family and yet as spicy as a Hyderabadi biryani when it comes to guarding the house, Pandikona will protect you from anything that comes as danger!”

This called for a little research. Rasgula is a syrupy dessert popular in the Indian subcontinent, while Hyderabadi biryani is an Indian dish made with basmati rice and goat meat, and is presumably quite zesty. Both are pretty good descriptions, we’ve come to learn, of a primitive-type hunting dog from the Pattikonda taluk-Kurnool district of India, the Pandikona Hound. Well adapted to the dry and arid climate of the region, the Pandikona has been long associated with shepherd families of the area who used the breed to hunt large and small game, kill insects and vermin, and guard the home.

When the Brits came to India, they noticed that the Pandikona looked similar to Doberman Pinschers (we think any similarities are seen more readily in the dark colored dogs) and they came to call these dogs the “Indian Doberman.”  Sadly, such recognition hasn’t help a breed thought by some to be one of the oldest in the world. With fewer than 1,000 dogs in a very large country (if not in the world), the Pandikona is on the verge of extinction.

As a primitive breed, the Paninkona is very independent, intensely territorial, and typically likes to be left alone. They have highly refined instincts, and curiously, the descriptions we’ve found on the breed always mention the breed’s massive jaw strength. Having said all that, they are also described as being very tolerant of children, and with training can make great pets.

The breed comes in several colors, and though it is now considered a medium sized dog, it was much larger early in the 20th century. A poison leak in a village killed or injured more than fifty of the dogs, and those left to reproduce impacted the gene pool by siring or whelping smaller puppies.

We were unable to find an image we could use without permission, so we encourage you to click on some of the hyperlinked breed names. We share instead a screenshot of the breed from a video we found on Indian breeds.