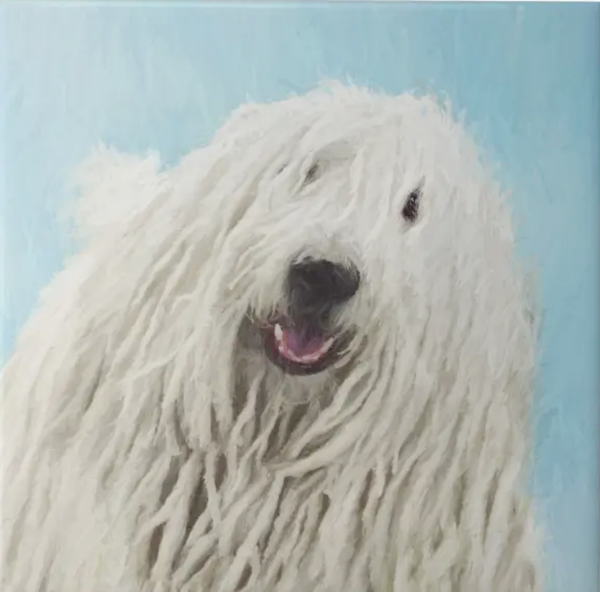 Ears on an adult corded breed like the Puli or Komondor isn’t something that stands out because the ears hang down and disappear into the rest of the dog’s coat, but the dogs obviously have them. How else would they ignore their owner’s admonition to, “DROP IT!”

The AKC standard for the Komondor describes the ear as being an elongated triangle with a slightly rounded tip, but a few other standards use a more unusual terminology to describe the breed’s drop ears, and that is “U-shaped.”

The FCI standard describes the ears as, “clearly pendant from the base and V- or U-shaped,” while the Kennel Club in the UK writes that ears are “hanging U-shaped.”  The United Kennel Club’s standard adds a bit more interesting detail by adding that the ears (in addition to being of medium set, hanging, and V or U shaped) are “devoid of erectile power.”

Why are ears “devoid of erectile power” important?  They’re important because one doesn’t want the livestock a Komondor protects to perceive the dog as a predator. Wolves have with prick ears.

As an aside, the ears on both the Komondor and Puli are often one of the first places for the hair to mat (the basis of cords). It’s also a place where a Komondor (a white breed) may have cream or buff as a puppy, and this is ok. The AKC breed standard stipulates that a “small amount of cream or buff shading is sometimes seen in puppies, but fades with maturity.”