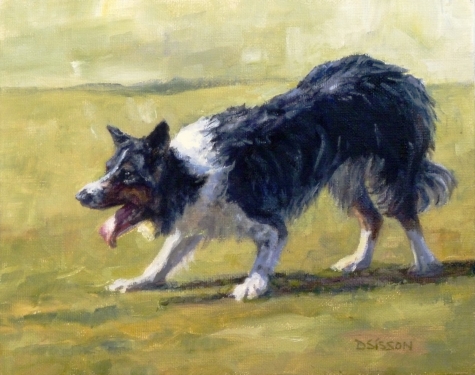 As the word itself goes, “colley” or “collie” is the subject of debate among cynologists and etymologists alike. One source maintains that “Collie” is a Gaelic word meaning ‘useful,’ while another relates the word to the German, ‘Kuli,’ pronounced the same way as the English ‘coollie’ which means ‘worker’ (and there is indeed a breed called ‘Alt Deutscher Kuli’ which works with sheep). A prevailing theory, however, is that “collie” is dialectal form of “coaly,” “colley” or “coly” which means “coal-black” in references to sheep with black face and legs.  The dogs that herded these sheep may have gotten their name by default, and with the birth of the legendary Old Hemp in 1893 and Old Kep in 1901, the current Border Collie type emerged. The breed’s name, however, wouldn’t be coined until 1918 when James Reid, the secretary of the International Sheepdog Society from 1915 to 1948, described the winner of the Supreme Championship as a “Border Collie.” Reid began keeping records of Border Collie (which is the ISDS Stud Book) and while he was writing the name, “Border Collie” on ISDS registration papers by 1946,  the first volume of the stud book wasn’t printed until 1955.