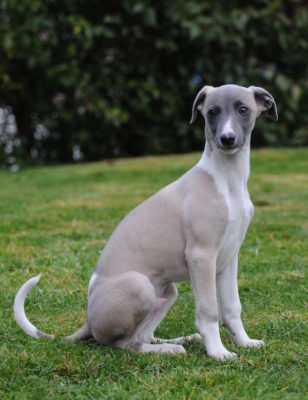 This youngster is a Whippet, the fastest domesticated animal of its weight.  An adult can reach speeds of 35 mph, in no small part because of a singular running style –  a double suspension gallop –  which means that all of a Whippet’s feet are off the ground twice during the stride when fully extended and again when fully tucked (as opposed to just once in other non-Greyhound related breeds only when fully extended), and at another, all four are back on earth.  Whippets have this gait in common with Greyhounds, and the two share another trait, a dolichocephalic head which describes a skull longer than it is wide.
It’s not a happy accident that the Whippet so resembles a Greyhound. At the end of the 19th century, there was no distinct separation between these coursing hounds, and crosses between Italian Greyhounds, Greyhounds, and Whippets were occurring well into the 1900’s. One author – Frederick Freeman Lloyd – threw another dog into the mix when he stated in his 1894 book, The Whippet and Race Dog, that the Whippet “was originally produced by a cross between the Greyhound and Terrier,” and in 1947, another author, B. S. Fitter, wrote that terrier blood gives the Whippet his gameness and tenacity, while the Greyhound contributed speed, stamina and beautiful lines. Others would come along to vigorously dispute this claim of terrier blood.
Whatever the recipe of DNA, miners of Northumberland and Durham, too poor to keep Greyhounds, found that Whippets were just as game to chase hares, and upon entering an arena with rabbits, would “snap” them up, leading to the breed’s nickname, the “snap dog.” Upper classes found the sport to be “low brow” (to say nothing of cruel) since the rabbits had no means of escape. Fluttering rabbit-skins, and later still, rags, came to replace live animals.
As writer, historian, and Whippet fancier, Bo Bengtson, points out, the racing Whippets of England’s north counties became so popular that this “new” breed began to attract national attention as “the poor man’s racehorse.”
Occasionally, you might find reference to a “bully whippet.” This refers to an exceptionally muscular dog, the result of the  myostatin gene mutation that happens only in Whippets. Two myostatin genes result in a normal whippet, but two mutant myostatin genes creates the “bully whippet.”
Image of a blue fawn Whippet youngster by Andy Carter – Flickr: Maverick, CC BY 2.0, https://commons.wikimedia.org/w/index.php?curid=32823782