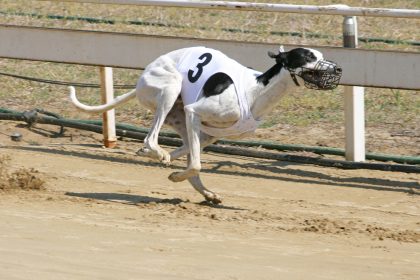 To be a well informed dog owner, it’s another one of those terms you should know. A “tuck up” is a small-waisted waistline, the place where the body has a shallower body depth at the loin. It’s really important in some breeds, so let’s illustrate it in a more colorful way.

Two guys have been entered in a sit-up contest by their buddies as a joke. In the contest, a complete sit-up is touching one’s toes.  “Joe” has a 32″ waist that’s hard and muscled, what some would call a “six pack.” And no, we don’t have his phone number.  “Bill” is carrying a few extra pounds that are evident in the rolls spilling over his waistband.

Who do you think has less gut to clear on the way to his toes, Joe or Bill?

It’s the same with dogs.  Sighthounds have definite “tuck ups” for a reason.  Imagine a Greyhound who just has spotted a rabbit. He bursts into a run, and as his front legs touch the ground, his rear legs reach and drive forward to grab as much ground as possible so he can cover more real estate. His rear legs must move beyond the dog’s midsection in order to “pull” more land underneath him. If our Greyhound is overweight or unsound, that rabbit is going to outrun him. We might root for the rabbit, the reality is that historically, most sighthound breeds were used to put food on the table by the people who kept them for a reason. A dog that couldn’t do its job not long for this world.

“Tuck ups” vary from breed to breed.  A Pointer’s should be “apparent, but not exaggerated,” and in the Borzoi, a tuck-up (also known as the “underline”) is one of the hallmarks of the breed’s silhouette: “Loins: Extremely muscular, but rather tucked up, owing to the great depth of chest and comparative shortness of back and ribs.”
In some breeds, “tuck up” is virtually unmentioned.
Depending on the dog’s build, some waistlines are well-established, others are barely visible due to bone structure or being overweight.  In short coated breeds like the Azawakh, there is no room to finesse the point, the tuck up is where it is. 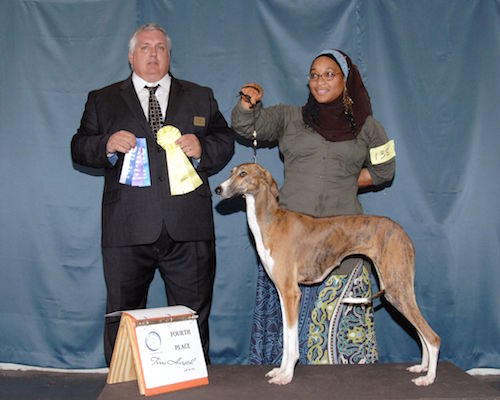 Aliya Taylor, whose dog this is, writes: “This is a ‘tuck up’ for the Azawakh. She is a bit on the heavy side for an Azawakh in this photo, but I think its a good example of a sighthound tuck up.”
In a more coated breed, an experienced groomer can create the illusion of more tuck up in a coated breed with proper placement and trimming, but first they have to know how to find it. Interestingly, there are three tips that some groomers used to find the proper placement for the tuck-up on a dog:
First: Some groomers simply lift the dog’s back leg and gently push it towards the dog’s body. Where the stifle, or knee hits the body is where the tuck-up point should be.
In the “Last Rib Method,” a groomer feels the ribs and locates the last two ribs. Directly below those two ribs is where the highest point of the dog’s undercarriage is found. This would be the point of tuck-up.

The third and last method is more visual. The groomer measures the dog into thirds from the point of shoulder to the point of rump. The highest point on the dog’s underneath line forming the tuck-up will be at the 2/3 point. The dog’s rear assembly will be the final 1/3.  The “sweet spot” is when the tuck-up point is set at the 2/3 – 1/3 point.

Show us your dog’s tuck up so we might all learn!