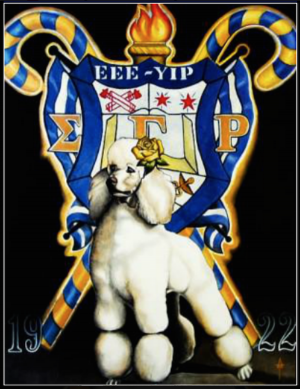 The first African American sorority, Alpha Kappa Alpha Sorority, was formed on the campus of Howard University, but it is just one of four major black sororities, all of which were established in early twentieth century.  The others are Delta Sigma Theta Sorority,  Zeta Phi Beta Sorority, and Sigma Gamma Rho Sorority. Only one of them, however, has a Toy Poodle as its mascot.

Sigma Gamma Rho Sorority was the first African American sorority founded at Butler Butler University in 1922 by seven schoolteachers.  From their website: “Sigma Gamma Rho’s greatness is embodied in its distinctively selected mascot and flower. The French Toy Poodle and the Yellow Tea Rose truly represent all the unique qualities that form the sisters of and in Sigma. The Poodle is credited for its superior intelligence, stunning beauty and wide-ranging ability. The Poodle like the Sigma woman has the potential to excel at anything that she puts her mind to…”