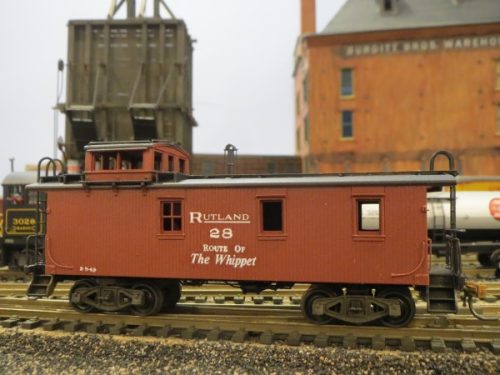 The Rutland Railroad was located primarily in the state of Vermont and extended into New York at both its northernmost and southernmost ends. It was known for its classic forest green and yellow livery that moved large amount of milk and dairy products over its system, but perhaps more than that, it was a quintessential New England railroad serving small towns tucked away in the Green Mountains and chugging through covered bridges. Its slogan even began the “Green Mountain Gateway.”

And it was money pit.

In his book, “The Rutland Road: Second Edition,” Jim Shaughnessy notes that the carrier literally ran from nowhere to nowhere, and that made it tough to attract lucrative and sustainable freight business. But to be fair, flooding in 1927 hit the company hard, as did the Great Depression, and the company was forced into bankruptcy in 1938. From then on, the states of its finances always seemed to be “patch, patch, patch.”

By 1953, the division between Chatham and Bennington was abandoned. Traffic on the line dried up, and it wasn’t profitable to run.  The tracks were removed, and buildings left to nature.  During the next ten years, a series of strikes ended the Railway as well. The Rutland finally gasped its last “choo choo” when declining revenues forced it to succumb to the long battle of money troubles exacerbated by the strikes. It closed in 1963.

But we’ve gotten ahead of ourselves. We need to go back to 1843 when Vermont chartered the Rutland & Burlington Railroad to connect its namesake cities, and things looked bright. In 1851, the “Milk Car” was born, and it began shipping butter to Boston in purpose-built freight cars that cooled the butter with ice. The line struggled along, but without a solid financial operation, the Rutland entered receivership for the first time in 1938.  It was forced to cut costs and reduce wages to try to improve its financial standing, and a year later, Vermont agreed to suspend the company’s tax payments for a couple of years to help it recover.

In an effort to grow its customer base, increase tonnage, and win back freight business, a high-speed, timed freight train which ran the length of the system hauling bridge traffic was introduced, and it was successful to some extent.  To underscore its speed, it was known as “The Whippet,” a line that ran from Boston to Norwood, NY. Rutland Railroad even promoted the line by painting “The Whippet” slogan on their boxcars, caboose fleet, and #28, a twenty-six year-old 2-8-0 a locomotive that was revamped by adding silver trim, skirting, and, of course, the Whippet slogan.

After the attack on Pearl Harbor on December 7, 1941, and the United States entered World War II, “The Whippet” started to fade away. Old #28 was stripped of her skirts, and her metal donated to the war effort.  A few “Whippet” boxcars survive to today, including one at the Danbury Railway Museum.

In 1964, the state of Vermont reopened the line under the management of the new Vermont Railway.  Vermont Railway is now a part of the Vermont Rail System, which also includes the Clarendon & Pittford Railroad, Green Mountain Railroad, New York & Ogdensburg Railway, and the Washington County Railroad. They haul both freight and excursion passenger trains over the remaining system, much to the pleasure of thousands of passengers who flock to the line every year to enjoy the state’s beautiful scenery.