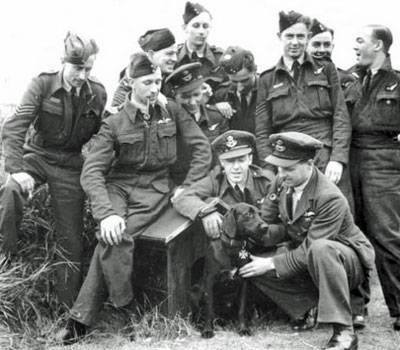 The Dam Busters is a 1955 British epic war film that recreated the true story of Operation Chastise, an ingenious operation that saw the British – and specifically, the Royal Air Force’s 617 Squadron – attack German dams at night during World War II by dropping the ‘Bouncing Bomb’ devised by the British inventor Sir Barnes Neville Wallis.
A personal story emerged from the RAF’s No. 617th Squadron that centered upon a black Labrador Retriever named “Digger” (not his original name).  Owned by British Royal Air Force Wing Commander, Guy Gibson, the Lab was the beloved mascot of the men of the No. 617th Squadron.  Sadly, on the night that Operation Chastise was launched, Digger was hit and killed by a car outside the base. Worried at how it would effect the men (and mindful of the bad omen it could portend), Gibson ordered that Digger’s death be kept secret, and that his dog be buried outside his office at midnight which was done as the Ruhr Valley dams were being attacked. Digger’s name was even used as a code word when the German dam was being breached during the famous mission.
To this day, there are people who maintain that Digger haunts the area.  The first sighting of Digger’s apparition was probably in February 1952 when Leading Aircraftman Yeomans, a waiter in the Mess, spotted the Labrador sitting close to a large heap of coal  used in the Officers’ Mess. “The dog sat motionless,” recalls Yeomans. “It sat looking up towards the upper windows at the rear of the building.”  Yeomans watched the dog for about two minutes, and eventually, his curiosity got the better of him; he got up, and went out along the rear passage to the rear door which he opened to call out to the dog, a process that took less than 15 seconds. The Labrador had vanished.
There were other sightings around the same time. At least five people, including Mess waiters and a WRAF aircraftwoman, saw the Lab running through snow covered fields, but the dog left no foot prints.
A photograph taken during the 1980s launched an investigation into paranormal activity around the base. The picture shows a black Labrador sitting beside a group of choir singers visiting the Dam Busters memorial. The photographer, however, insists that the dog appeared just as the photo was about to be snapped and refused to be shooed away, but once he snapped the picture, the dog vanished never to be seen again.
Ghost hunters who have visited the base are convinced that Digger’s spirit lingers by his grave, and at his master’s memorial and museum. They cite cold spots that measure roughly the size of a dog, as well as late-night growls that witnesses have heard outside Gibson’s former office. The curator of the museum has confided that for years, he has felt a presence following him, and he definitely feels that it is that of a dog.
In 2011, rumors came out that the story of the Dam Busters was set to be retold in a film by Lord of the Rings director Peter Jackson, though the dog will be renamed Digger, as we have done.
Totally off topic, but the original The Dam Busters movie served as inspiration for the final battle scenes in the 1977 movie,  Star Wars: Episode IV – A New Hope. It’s also said that Princess Leia’s famous hairstyle as worn by Carrie Fisher came from the way actress, Ursula Jeans, portraying Mrs Molly Wallis, wore her hair. Clips of the film were also used in Pink Floyd: The Wall in 1982.
Our image is of a photo taken of Digger and his mates during better days and was found on Pinterest. Credit happily given upon receipt of information.