In our humble opinion, hockey is one of the greatest sports ever.  It is arguably the most dangerous sport in North America, and one way or another, hockey players do everything that athletes in football, baseball and basketball do, but they do it on a sheet of ice wearing sharp blades of steel on the bottoms of their feet. How sharp?  If the edge of a skate blade, propelled by the weight and force of prime-conditioned athletes, can slice through hard ice with ease, imagine how fast it can move through human skin and muscle tissue?   In 1997, Colorado Avalanche captain, Joe Sakic, suffered lacerated calf tendons after being cut by a skate. In 2008, Florida Panthers forward, Richard Zednik, had an external carotid artery sliced by a skate from teammate Olli Jokinen, who had been upended. Zednik’s artery was not severed, but he lost five units of blood and needed emergency surgery. He did eventually made a full recovery.

But we digress from the topic of dogs.

It’s unbelievable to think that hockey players didn’t always wear helmets, and goalies didn’t always wear goaltender masks.  Clint Benedict became the first goaltender to wear facial protection in a game in 1930. He was laughed at. When his courage was questioned, Plante made an analogy to a person skydiving without a parachute. Despite bumps in the road, the face-hugging fiberglass goaltender mask soon became the standard, and by late 1969, few NHL goaltenders went without one.  These days, goalies wear fiberglass caged hockey masks with a plastic extension to guard the neck that usually hanging loose for better 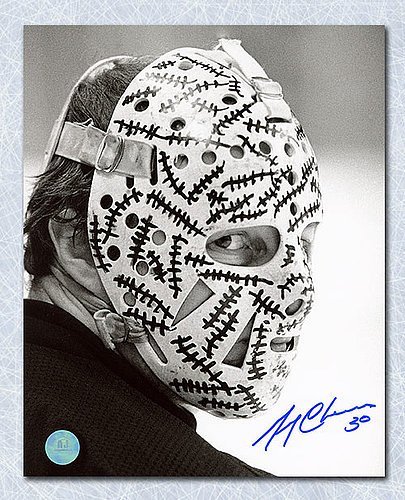 The tradition of “decorating” a goalie mask likely started with Boston Bruins goaltender Gerry Cheevers who had Bruins team trainer, John “Frosty” Forristall, draw stitches on the mask where Cheevers would have been cut if he hadn’t been wearing it.

These days, goaltenders are well-identified with their helmet design, and for the 2013-2014 season, future Hall of Fame goaltender, Martin Brodeur, did something personal. He added the images of his two Bulldogs, Stan(ley) and Vez(ina) on either side of his mask (Vez is on the right side, and Stan is on the left).  Painted by artist Sylvie Poitras of Airbrush Zap, the mask also combined the vintage style long associated with Brodeur. The family dogs also each made an appearance in Brodeur’s EA Sports Cover Vote campaign (here is Stan’s version, and here is Vez’s).  That same year, he tweeted Happy National Dog Day wishes from his Bulldogs. Perhaps next year, he might extend Happy National Purebred Dog Day wishes?