It’s not surprising to learn that businesses in other countries have dogs as part of their logo, though their choice of breed may sometimes be puzzling when it’s not native to the country. 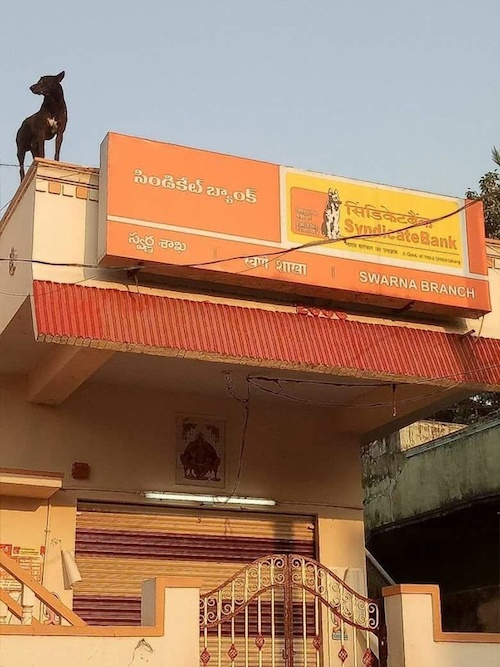 Image found on Pinterest and happily credited upon receipt of information. The actual dog on top of the building, we suspect, is not part of the logo.

Syndicate Bank in India was established in 1925 by three visionaries who shared a strong commitment to social welfare. In the bank’s early days, the objective was primarily to extend financial assistance to local weavers crippled by a crisis in the handloom industry. The bank grew, was renamed the Syndicate Bank Limited in 1954, and in 1969, was nationalized along with 13 other banks. As far as we know, there has always been a German Shepherd Dog in the logo, and through the years, the dog has become more prominent.  The canine underscores the bank’s motto: “Faithful and Friendly,” and to draw a correlation between a dog as man’s best friend and their bank as a reliable, faithful friend. Why a German Shepherd Dog isn’t clear, though one might as easily ask, “Why not a German Shepherd Dog?”

As an aside, someone thought to try an experiment to see if brands allow their own dog mascots to enter their stores. Based on the results in the video, the answer would be a resounding no.

Happily, more and more businesses in the United States are adopting a dog-friendly posture.